The Pirates of Penzance @ Coliseum, London

by Sam Smith
published: 11 May 2015 in Opera and Classical Reviews
Tweet 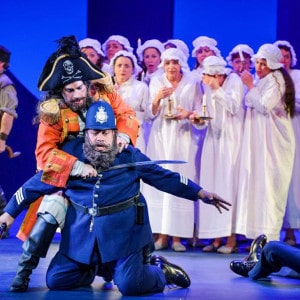 English National Opera has a long tradition of inviting directors from other spheres to try their hand at opera. However, for every great success story such as The Marriage of Figaro (Fiona Shaw) or Benvenuto Cellini (Terry Gilliam) there are an equal number of productions that have not quite made the grade. The Pirates of Penzance could by no measure be classed as a flop, but given that Mike Leigh has such a strong command of film, stage and Gilbert and Sullivan (he directed Topsy-Turvy which described the creation of The Mikado) the results on this occasion feel just a little disappointing.

It is a deceptively difficult task for a major opera house to pull off Gilbert and Sullivan because it is so easy for any production to fall either side of the tightrope it inevitably walks. On the one hand, these operettas require energy and so it is always a risk that top professionals in their pursuit of excellence will leave everything feeling just a little subdued. On the other, it can be all too easy to go for obvious laughs and pay insufficient attention to the works’ subtlety and dry wit. Amateur productions do not face so tough a time as we are inclined to set our expectations lower, forgive the odd bit of misplaced bravado, and most likely laugh because we know half of the people on stage. ENO enjoys no such luxuries, and this production does experience some moments that seem excessively restrained alongside others that simply feel too hammed.

When David Alden’s Peter Grimes became the first ENO production to be broadcast live to cinemas last year, its angular sets may have proved very cinematographic, but everyone was still working with a production that had already been created in 2009. Here, it seems that from day one the production, whose brightly coloured set sports flat planes and bold shapes and diagonals, was designed with the cameras in mind.

Such a set, however, does not so much update or change the original setting (the performers wear traditional costume in any case) as simply make the drama feel devoid of any meaningful context. This places even more onus on the performers to entertain us, which it is not easy for them to do when almost all of the first scene’s action occurs on a tiny section of the stage as the pirates’ ship is nestled into a wall. ‘Pour, oh pour, the pirate sherry’ features no more than a little aimless cheery swaggering, and Ruth sings ‘When Fred’ric was a little lad’ with virtually no visual support.

I have the utmost respect for both the wit and music of Gilbert and Sullivan, but when it comes to directing their works it is good to think of them as being more akin to The Producers than Radamisto. In other words, excepting a few arias and duets where the music can stand on its own, Pirates needs to be kept visually dynamic throughout, rather than having the final number of Act I sung with everyone simply staring out.

‘When the foeman bares his steel’ sees the policemen’s chorus do little more than stand in a line and occasionally walk around in a circle. There is something to be said for playing on the deadpan humour already inherent in a regimented chorus, and there are a few subtle things going on in their expressions and gestures, but there should still be more to entertain us than the accent of the Sergeant of Police. Despite having a designated choreographer (Francesca Jaynes), nowhere does this production come remotely close to matching the dynamic direction and movement to be found in Jonathan Miller’s 29-year old The Mikado.

There are also moments when the humour is played up too much. When Frederic first approaches Major-General Stanley’s daughters he says all the wrong things because he has never met a girl before, but to have them react with exaggerated expressions and tears rather destroys the beauty and subtlety of the joke. Similarly, Mabel’s initial wooing of Frederic is so overt and comical that it removes any sense in which she is genuinely enraptured by him.

If this production is either too sedate or too comical on some occasions, there are others when it gets the balance exactly right. Such moments include Frederic and Mabel’s farewell in Act II, and the Major-General’s Song. The latter is sung by Andrew Shore who would appear to have been born to play this part just as much as he was those of Doctor Bartolo and Sixtus Beckmesser.

Overall the cast is good. Robert Murray as Frederic has a strong tenor voice, and demonstrates sound understanding of the character although he sometimes comes across as a little lacklustre. Joshua Bloom on his first ENO appearance reveals the most magnificent bass as the Pirate King, even if his acting represents the epitome of rowdy, swashbuckling swagger. Rebecca de Pont Davies is a class act as Ruth, bringing out all of the pathos in the most wronged character in the entire affair.

Claudia Boyle makes an excellent ENO debut as Mabel, revealing a sumptuous soprano voice and wonderful coloratura. If there is a slight tendency to overact that would seem to be more a product of the direction, and her solo within ‘When the foeman bares his steel’ represents one of the few moments in the number that possesses sufficient charge. Jonathan Lemalu and Robin Baker are good as the Sergeant of Police and Samuel respectively, while Soraya Mafi, Angharad Lyddon and Lydia Marchione all make promising house debuts as Edith, Kate and Isabel. Lyddon, in particular, has a very interesting grain to her mezzo-soprano.

David Parry’s conducting is highly nuanced, and the production is successful in highlighting, sometimes humorously, the values that we may reel at today: the poor treatment of women, assumed reverence for the House of Lords, and the idea that a nobleman can be excused crimes for which anyone else would be punished. Nevertheless, for all its intelligence, this production only stands on a certain level, and one that means it is hard to picture this Pirates enjoying the same longevity and number of revivals as The Mikado.

The Pirates of Penzance will be broadcast live to selected cinemas in the UK and worldwide at 7.30pm on 19 May, and on BBC Radio 3 at 7.30pm on 29 June.

More on Mike Leigh
The Pirates of Penzance @ Coliseum, London