The Pirates of Penzance @ Coliseum, London 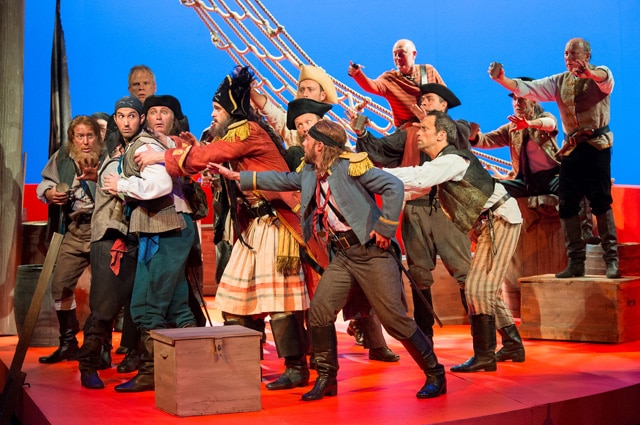 When Mike Leigh’s production of The Pirates of Penzance first appeared for English National Opera in 2015, the consensus appeared to be that it was a little disappointing. There seemed something strange about employing a brightly coloured set, which sported flat planes and bold shapes and diagonals, that did not so much update or change the original setting (the performers still wore traditional costume) as make the drama feel devoid of any meaningful context. When Gilbert and Sullivan’s works are all about certain values and hierarchies it is difficult for the performers to operate in virtual isolation. Even Jonathan Miller’s 30-year old production of The Mikado boasts a definite time and place, even though these are not the originals, so that the characters’ actions make sense for the society.

This production’s basic difficulty was compounded by some poor directorial choices. For example, almost all of the first scene’s action occurred on a tiny section of the stage as the pirates’ ship was nestled into a wall. This meant that ‘Pour, oh pour, the pirate sherry’ could feature no more than a little aimless cheery swaggering, while Ruth sang ‘When Fred’ric was a little lad’ with virtually no visual support.

There were also moments when the humour was played up too much. When Frederic first approaches Major-General Stanley’s daughters he says all the wrong things because he has never met a girl before, but when they reacted with exaggerated expressions and tears it destroyed the beauty and subtlety of the joke. Similarly, Mabel’s initial wooing of Frederic was so overt and comical that it removed any sense in which she was genuinely enraptured by him.

Although revival director Sarah Tipple does not overhaul the staging, she works with it slightly better so that the direction feels a lot freer. The difference is noticeable but not necessarily significant in Act I, but in Act II, when everyone has got into stride, everything is raised to another level. In fact, the evening is really made by the standard of the performances and the principals’ ability to work with the production. 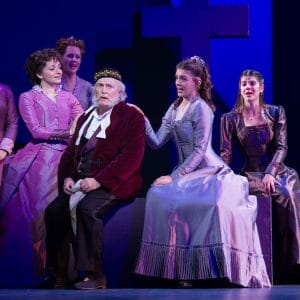 Gareth Jones conducts, and while the cast was good two years ago, the present one is even stronger. Andrew Shore as Major-General Stanley is one of only a few cast members to reprise their role from 2015 and who would ever want to replace him? In his model performance, excellent comic timing and wonderful facial expressions combine with a first class baritone to create a perfect portrayal of puffed-up pomposity. Ashley Riches, with his firm bass-baritone, and Lucy Schaufer, with her sensitive portrayal of a superficially comic character, also make an impression as The Pirate King and Ruth respectively. Besides Shore, however, the standout performance in Act I comes from Soraya Mafi as Mabel (she played Edith in 2015). Her soprano is positively radiant as she tosses out coloratura with ease, and her gestures and movements are just as precise as her vocal output.

Sir John Tomlinson is one reason why Act II is so successful. It is naturally a joy to hear such an accomplished Wagnerian sing the role of the Sergeant of Police, but he is also one of the best actors on the operatic circuit today. Two years ago ‘When the foeman bares his steel’ was positively boring, but it is raised to another level by Tomlinson who has the ability to look funnier than anyone else when simply raising a truncheon and marching around the stage. However, while Tomlinson’s facial expressions are spot on, his gestures are no bigger than those of the chorus members or his predecessor in the role; they are just brilliantly observed. Similarly, while ‘When a felon’s not engaged in his employment’ felt prosaic in 2015 as the chorus simply huddled around the Sergeant, with Tomlinson at the centre we really feel that the policemen are using a respite to reflect on their lives.

Other songs that worked well in 2015 such as ‘When you had left our pirate fold’, ‘Stay Frederic, stay’ and ‘Oh here is love and here is truth’ are equally successful now. This is partly because, involving only two of three people, the wider setting for the songs hardly matters, provided they have good performers to carry them off. In particular, although Harewood Artist David Webb feels a little hesitant as Frederic in Act I, he really comes into his own in Act II, capturing the humour perfectly in the first song, and demonstrating real tenderness of sound in the latter two.

There are still weaker moments, and while ‘With cat-like tread’ starts humorously as we watch the policemen ‘pop up’ it does not really go anywhere after that. Nevertheless, while nothing beats a first class staging of a Gilbert and Sullivan operetta, this Pirates proves that a thoughtful revival of a flawed production, which also boasts an excellent cast, can run it a very close second.

Mark Richardson plays the Sergeant of Police from 16 March onwards.