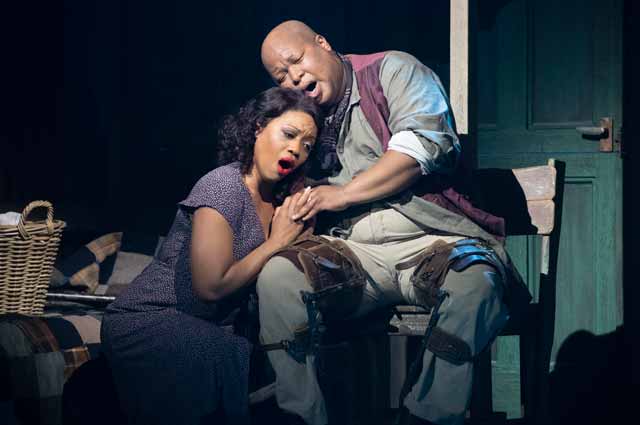 There have been several versions of Porgy and Bess, with London in recent years having enjoyed the Nunn adaptation of 2006 and Paulus adaptation of 2011. As a rule, these have cut the running time, replaced much music with dialogue, simplified several (inconsequential) plot points, and made the entire creation feel more like a standard piece of musical theatre.

While both, however, have their merits, they tend to make the piece seem too light when it needs to feel like a long, gritty haul in order to help us appreciate the hard lives that the characters lead. As a result, when it would have been so easy for Grange Park Opera to have presented such an adaptation as a way of complementing a glorious evening of picnicking in idyllic surroundings with a little ‘light’ entertainment, it is to be congratulated for not going down that road. It is to be doubly praised because director Jean-Pierre Van Der Spuy not only offers a production that has real gravitas, but one that possesses the dynamism that is so often missing from many equally worthy presentations.

Charleston’s fictitious Catfish Row, where the majority of the action takes place, is brilliantly conveyed in Francis O’Connor’s set by a series of skeleton-like structures that represent Maria’s cook-shop on the left, Serena’s house on the right and Porgy’s in the centre. These can be turned around to reveal the interiors, or pushed to the front when they need to be more prominent, while staircases, gangways and corrugated iron walls emphasise the ramshackle nature of the residences and hence their inhabitants’ hard way of life.

There is a lot of dancing, courtesy of choreographer Lizzie Gee, and it comes directly from the members of the chorus, who were clearly selected for their all-round abilities. This helps the piece to flow as a seamless whole, as everything seems to arise from the very heart of the community, so that the highs, the lows, the exuberant numbers and the intimate moments of tenderness stand as variations within a tight overarching concept. The storm scene, when all are sheltered in (and around) Serena’s house, could not be more poignant, and it is noticeable just how little applause there is over the evening as the audience clearly feels that it is caught in the midst of an intense experience as opposed to simply hearing a set of enjoyable songs.

The craps game sees each man throw the dice in a manner that helps to mark out their character, while the subsequent killing has a dance-like quality in the way in which Crown throws, and Robbins responds to, certain punches, before the climax feels especially brutal as Crown takes a hook to his victim’s chest. In truth, numbers such as ‘Oh, I can’t sit down’ and ‘I ain’t got no shame’ do feel a little too respectable as the obvious pursuit of excellence sees them lack a little in real pizzazz, but it is hard to criticise a chorus that sounds so accomplished throughout. On the other hand, ‘It Ain’t Neccessarily So’ is perfectly pitched as Sportin’ Life (an excellent Rheinaldt Tshepo Moagi) dances about the stage, followed by several others, as everyone responds to his words with ‘woos’.

The one mark against the evening is the enunciation, which, with a few notable exceptions, is of a level that would make those unfamiliar with the work struggle to know what was happening, especially since there are no surtitles. On the other hand, the standard of singing is very high, with several principals really standing out. As Clara, Francesca Chiejina, a former Royal Opera Jette Parker Young Artist, sings ‘Summertime’ with a glistening radiance, while Sarah-Jane Lewis brings exceptional dignity to the role of Serena, especially in the direct aftermath of Robbins’ death. As Maria, Chantale Nurse’s spats with Sportin’ Life are priceless, while Donovan Singletary as Crown asserts a highly accomplished bass-baritone.

Stephen Barlow conducts the BBC Concert Orchestra extremely well, while Musa Ngqungwana displays a very fine bass-baritone, and imbues Porgy with both a happy-go-lucky joy for life and a seriousness that gives his character appropriate gravitas. Laquita Mitchell reveals an equally pleasing voice, although her emphasis on Bess’s vulnerability, which it is important to highlight, does mask other aspects of her character as she lived right on the edge until she met Porgy, and, it seems, could revert to her old ways at any moment. Nevertheless, she grows over the evening so that her final scene with Sportin’ Life is quite electric, while the scene on Kittiwah Island is also revealing of her character. Alongside palm trees, it features a silhouette of the paddle steamer that will take everyone home in the background. There is a lot of debate over much Crown forces himself upon her here, and how willing she is to succumb, but she only lays down and submits after we have seen the steamer sail off, thus suggesting that she only does so at a point when all other avenues seem closed to her.

Grange Park Opera’s 2019 season continues until 13 July. For details of all events and to book tickets visit the designated website.