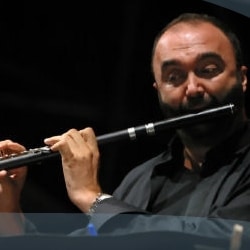 The Primavera Chamber Ensemble and Massimo Mercelli are world-renowned and in this concert they graced the stage of the Wigmore Hall.

The programme was varied and included a world premiere, Chaotic Harmony by Philip Glass. The piece is set for flute (Mercelli) and cello (Andrew Fuller).

Both men performed beautifully with deep rich tones, and the performance reflected the elegance of the music.

Chaotic Harmony was commissioned for a film about Tai Chi, a Chinese martial art, directed by the composers Tai Chi teacher. Its name suggests something very atonal, however, compared with some contemporary music, the harmony is temperate. Instead the title of the piece refers to the contradictions, extremes and balance found within its structure.

The concept of balance, physically and mentally, is considered important in the philosophy of Tai Chi. Glass music alternates between peaceful, thoughtful sections full of arching phrases, and dramatic, energetic sections made up of accented couplets and syncopated rhythms.

A wealthy repertoire of effects and techniques are used for the cello. These included heavy double-stopping and pizzicato and strummed chords. However, although lyrical, the flute part lacked any unusual characteristics even though it was given its share of interesting rhythmic material.

In accordance with Eastern philosophy, the cello appeared to play the part of the steady bass backbone and the flute represented the upper section of the body with its agility. The pieces intense chromaticism coloured the piece with shades of the orient leaving the audience mesmerised.

The second offering was a sweet String Trio in B Flat D. 471 (1816) by Schubert. This short Allegro was composed as a small chamber piece. It was purely for the composer and his friends private amusement. Therefore, the music was light-hearted and intimate making it an agreeable addition to the programme.

Paul Manley (violin), Sarah-Jane Bradley (viola) and Andrew Fuller (cello) played with good communication and a sense of togetherness. The trio made the most of Schuberts witty writing. Youthful tunes were playfully passed around. However, it would have been nice if there was a greater viola presence at times, and Manleys violin playing seemed slightly apologetic on occasion, almost as though he was all too aware of his relative isolation.

The Schubert was followed by Rossinis Flute Quartet No. 2 in A (1804) where the trio was joined by Mercelli on the flute. The Quartet was written by Rossini when he was twelve and the playful music reflects this. Each instrument had lyrical solos (a premonition of his success with the Italian vocal style?) and the group obviously had fun playing the piece.

The Quartet was a wonderful balance of charming, bright and friendly melodies in the outer two movements and a moving lyric line placed delicately over rippling broken chords in the Andante middle section.

Mercellis performance was a stark contrast from the Glass which showed off the deep velvety tone he is capable of. Instead the Rossini showed his virtuosic dexterity through a seamless flurry of babbling semiquaver runs.

After the interval the whole Primavera Chamber Ensemble played Dvorks String Quintet in G Op. 77 (1874). The additions to the ensemble were Martin Smith (2nd violin) and Stacey Watton (double bass). Although this is a wonderful piece and the audience was delighted, I couldnt help but be disappointed that Mercellis skills werent given another outing.

A special mention must be given to Wattons excellent and entertaining playing which even included a drumstick-like twirl of his bow! The addition of the double bass brought a new dimension to the chamber piece and allowed the cello to integrate more into the texture. It was also a good opportunity to see the instrument in a more intimate environment.

The Dvork was a wealth of musical treasures from the dark romantic harmonies in the opening Allegro to the dance-like Scherzo, the pastoral lilt in the Andante and the rhythmically enticing Finale. All the performers played with humour and a great sense of fun prevailed, and Manley seemed to be more relaxed amongst his fellow players which resulted in a more consistent sound.

In all it was an enjoyable concert with a fun programme. Its just a shame that the programme notes ended abruptly in mid sentence!