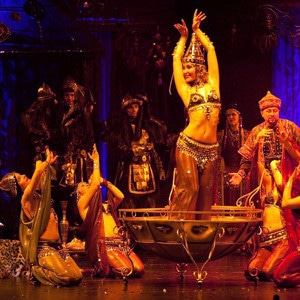 Founded in 1991, the Kolobov Novaya Opera Theatre of Moscow makes its first ever visit to the United Kingdom with a production of Prince Igor. Borodin’s sole opera is undoubtedly a mainstay of the Russian repertoire and yet performances in Britain are not so frequent. In all likelihood, the only very recent opportunity that the majority of British people have had to see it performed live is via a satellite screening from the Met about a month ago.

The opera as presented in New York was reconceived by director Dimitri Tcherniakov and conductor Gianandrea Noseda to strip out many additional melodies (though not orchestrations) contributed by Rimsky-Korsakov and Glazunov, and to restore some fragments of Borodin’s music that had been removed by them. Although the production had its merits, the problem with this approach was that Borodin developed his ideas for his unfinished opera over eighteen years, and the other composers’ alterations and additions were in large part an attempt to create a coherent whole out of what he left behind. It is therefore questionable what value is served by supposedly restoring Borodin’s original vision when this arguably reintroduces much of the confusion and unwieldiness that had been eliminated.

Yuri Alexandrov’s production does not initially seem to overhaul things quite so much, but it still constitutes a new version. It cuts Glazunov’s Overture at the start before including an abridged version in between the Prologue and Act I. It also varies more elements towards the end so as to assert the spiritual as opposed to heroic aspects of the story.

Overall, the staging still feels traditional in style but this is only right because it offers us a great insight into the Russian operatic approach to fusing musical, visual and storytelling elements. For example, expressions and gestures are frequently manifested through stylised and choreographed actions that both tie in with, and feel integral to, the music. The women plead their case to Yaroslavna with co-ordinated stooping hand gestures, the men revel under Galitsky’s rule with Cossack-style stamping and dancing, and the boyars announce the defeat of Igor to his wife by advancing en bloc.

Vyacheslav Okunev’s sumptuous and exquisitely made costumes capture the society well, delineating its various strati of townsfolk, boyars, soldiers and clerics. The set conveys the essence of Putivl by suggesting it is a wealthy, yet still slightly dilapidated, city. Modest dwellings are set against crumbling gatehouses and ornate stonework, while barricades hint at the forever present threat. The majority of the lighting, designed by Irina Vtornikova, floods down from above, with eerie shafts of various hues generating an almost spiritual atmosphere.

Novaya Opera has an orchestra of 160 players, a chorus of 120 and 63 soloists, and the wealth of talent it has to draw on soon becomes apparent here. Sergey Artamonov asserts his presence, and Igor’s frequently torn feelings, with his powerful bass instrument, while, as Yaroslavna, Elena Popovskaya is blessed with a soprano voice that combines spine tingling vibrancy with exceptional clarity, especially at the top of her register. As Igor’s son Vladimir, Aleksey Tatarintsev’s tenor sound works well with the feistiness, allure and vocal resonance of Agunda Kulaeva’s Konchakovna. Evgeny Stavinsky is excellent as Galitsky, Vladimir Kudashev is a suitably deep Konchak while conductor Jan Latham-Koenig extracts a smooth and burnished sound from the Novaya Opera Orchestra.

The Polovtsian Dances are particularly dynamic, piling dramatic fighting on top of sensuous dancing to highlight the allure of, and hierarchies inherent within, Konchak’s empire. They are also used to reveal Igor’s own state of mind and ultimate rejection of the easy, yet immoral, life. During the Dances he is adorned with rich clothes and a sword, and his tankard is filled high. At the end, however, he catches a glimpse of the consequences to himself and his offspring were he to embrace the associated lifestyle, which then leads to possibly the most intriguing part of the evening.

Visually the ending suggests that Igor and his wife displace the man that he would have become had he not repented, but the final (and exquisitely sung) chorus hardly embraces the notions of forgiveness and renewal by not moving beyond describing the destruction wrought by the Polovtsians. This ending may jar with some viewers as being out of balance, but for me it is an excellent illustration of how opera can utilise the aural and the visual to simultaneously tell us different sides of the same story.