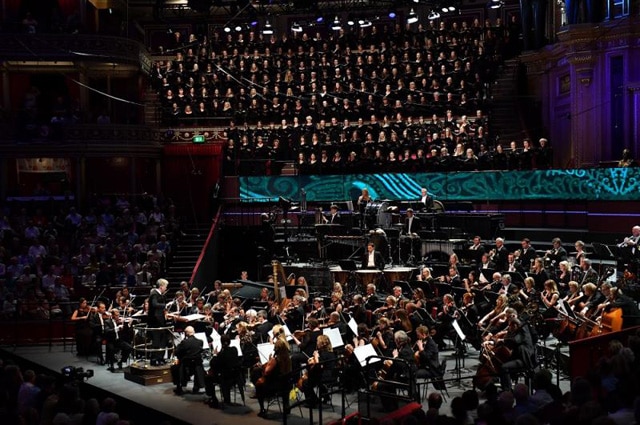 John Adams’ Harmonium is arguably the most well-known secular Minimalist choral work, and programming it as the final piece for the Proms’ first night was a stroke of brilliance. Setting poetry by Donne and Dickinson, it is a twinkling roller-coaster ride of rhythmic insistence interspersed with hazy, dreamlike sequences. The choral forces – made up of the BBC Symphony Chorus and the BBC Proms Youth Choir – numbered hundreds, filled the choir seats to capacity, and produced a thrillingly tumultuous sound, right on target for the calculated abandon of the opening of ‘Wild Nights’, the piece’s third movement. The BBC Symphony Orchestra was also on fine form, producing some magnificent brass ‘hooting in the fog’ for the electric build-up of this same movement, that contrasted well with the delicately translucent quality they achieved for the short, otherworldly orchestral interlude in the middle of ‘Because I Could Not Stop for Death’. Edward Gardner, opting for well-paced, but not gabbled, tempi throughout, managed the gargantuan feat of holding together, with absolute precision, Adams’ complex rhythms performed by hundreds of people in a large space.

Synchronisation was, however, not always perfect for the main work of the first half, Beethoven’s third piano concerto. The soloist, Igor Levit, gave an intense yet light-touch rendering of one of the pieces that marked Beethoven finding his own voice , and which is consequently often given a more bombastic exposition; the orchestra responded to this extremely well, finding some gloriously quiet yet rich sonorities, occasionally pointed up by the softly rhythmic beats of the timpani. The cadenzas, particularly, were delicate, and given intimate performances – beautifully effective in such a large space – and the arpeggio passages in the second movement were light as feathers and heart-achingly beautiful. Levit, though, is a difficult soloist to watch; he hunches over the piano in a chiropractor’s nightmare of a posture, entirely absorbed in his work, occasionally popping up to see if the orchestra is still there. While this self-absorption makes for an exquisite solo performance, it doesn’t always make for perfect co-ordination, and there were moments in the first movement where Gardner was clearly working hard with the orchestra to second-guess what was going to happen. 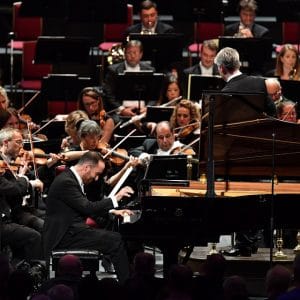 For his encore piece, Levit, the adopted European, performed a piano transcription of Beethoven’s ‘Ode to Joy’. It was a not-so-subtle political gesture that found favour with the audience, but perhaps, given the date, the double symbolism of ‘La Marseillaise’ might have served better.

It is now a long tradition that the Prom season should open with a brand new commission, and Tom Coult’s St John’s Dance took its place in a long line of well-chosen openers. The title of the piece refers to the mediaeval occasions of mass hysteria (also known as St Vitus’ Dance) when large crowds would break into frenzied uncontrollable dancing. It opened quietly with a light-bow-touch on a violin, causing premonitory disturbing harmonics. This broke away into a series of three dances that featured swaying orchestral rhythms punctuated by bellowing brass chords, hoedown-style mayhem, clunking temple bells, dizzying rhythmic passages from pizzicato strings and wood blocks, and a sad, mad little oboe tune; the whole piece – like a sudden return to reason – then floated away into nothing on a twittering of flutes and piccolos. Another impressive opening to another impressive show.