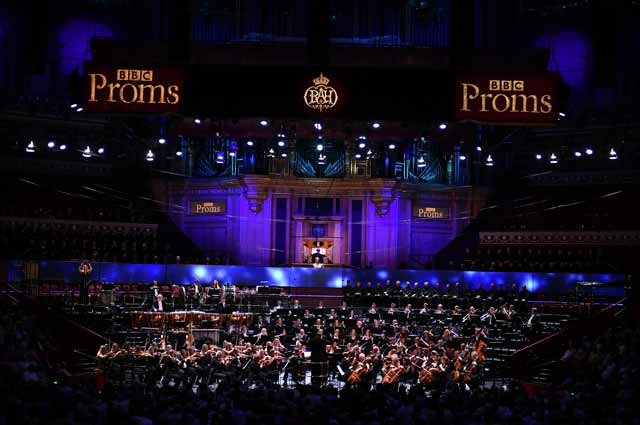 The untimely death of Oliver Knussen last week was marked by an unannounced performance of his Flourish with Fireworks at the opening of the first of the Proms. Full of the composer’s trademark angularity and texture, it made a fitting tribute to Knussen’s long association with the BBC Symphony Orchestra.

Sakari Oramo has an approach that might best be described as ‘brisk’. It’s difficult not to descend into Nordic stereotype, but there is always a feeling of clean line and marked dynamic colour about his interpretations. This technique pairs well with pieces whose effect comes from their drive and dynamic contrast, and so it was with many of the movements from Holst’s The Planets. ‘Mars’ was more than usually edgy – hard-stick timps and an inexorable progress gave us the terror of mechanised warfare. Mercury was as skippy as you’d want, all of the cross-rhythms delineated, moving between silvery footsteps (á la ‘Des pas sur la neige’) and an occasional gallop. ‘Uranus’ began slowly, but the galumphing magician soon emerged from the whirling changes in volume. ‘Saturn’ was presented as steely and distant, its clock of life ticking as in a distant cobwebby room, and the reduction of the short woodwind passage towards the end to almost nothing was deliciously spooky. The chilly mists of ‘Neptune’ were summoned with its quiet-but-marked arpeggios driving what can be a formless piece; the off stage chorus provided by the youth ensembles was perhaps a little too prominent in places. Oramo’s no-nonsense treatment of ‘Jupiter’ was no bad thing, as there’s a tendency for those of us who are familiar with its broad melody as the hymn tune ‘Thaxted’ to become overly sentimental at this point. 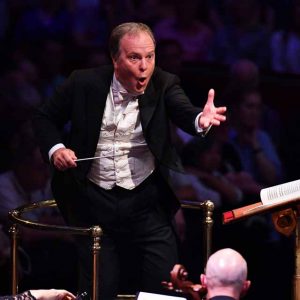 It was in ‘Venus’ and in the first main piece, Vaughan Williams’ Toward the Unknown Region, where Oramo’s style was at odds with what was required. Surprisingly for a respected Sibelius interpreter, he is not a man to wallow, and both of these pieces need a little flexibility in tempo, which they didn’t get. Yes, the contrasts in volume were there – the gradual two-steps-forward-one-step-back crescendo throughout the Vaughan Williams worked well, as did the formlessness of the opening. But the English pastoralists need, on occasion, to slow down for a breath of warm summer air, and ‘the unknown region’ was approached with striding determination, rather than inquisitive hesitancy.

Five Telegrams by the composer Anna Meredith and lighting effects specialists 59 Productions is a piece based on themes arising from the pro-forma telegrams allowed to First-World-War soldiers. It is a massive sound-and-light work (for full orchestra, chorus, augmented brass and percussion and organ) in five short movements that puts the listener through an emotional wringer.

The opening ‘Spin’, explodes like a piñata: massive streamers of light accompanied by vibraphone, ostinati trombone clusters, distant trumpets and banging chords from full orchestra. ‘Field postcard’ is largely choral, the overlapping melodic fragments, summoning the truncated and formulaic nature of the delete-as-appropriate telegrams, and leaving the listener in no doubt as to Meredith’s minimalist influences. The third movement’s title – ‘Redaction’ – is illustrated through the metallic twangs and sinister chords that gradually obliterate the sad little 6/8 underlay in the harps.

The busily moving blocks of colour for the breathtaking ‘Codes’ are accompanied by insistent machine-code ostinati in a movement that culminates in the brass bands either side of the stage blurting out massive chords. Illustrated by projections of maps and compass-bearings, ‘Armistice’s’ yearning cello tune broadens to a massive full chord, before closing in a suitably dramatic susurration of choral whisper. This year’s Edinburgh Festival will also see a performance of this intelligent and affecting work.