The BBC Proms’ First Night serves up an emotional opener. 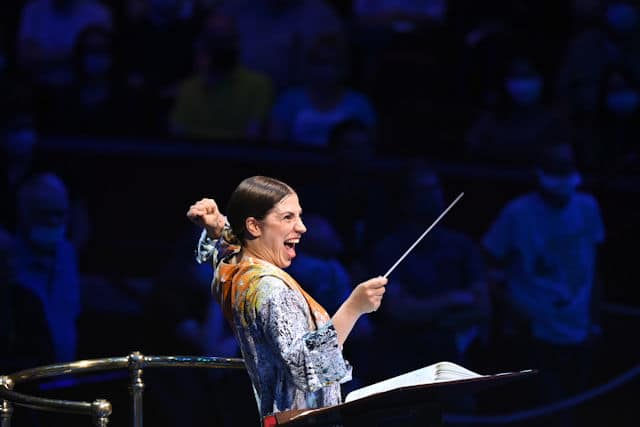 On Friday night, for the first time in nearly two years a live audience was able to attend a Prom; this season also marks 150 years since the opening of the Royal Albert Hall. The bottle of musical bubbly opened for the occasion by the BBC Symphony Orchestra and their Chief Guest Conductor Dalia Stasevska, was perfectly balanced for richness, sparkle and a touch of astringency: some favourites that are not mawkishly popular, but nonetheless comfortingly familiar, and a new work by James MacMillan, arguably Britain’s most accessible contemporary composer.

Vaughan Williams’s Serenade to Music, a setting of text from The Merchant of Venice, was the perfect opener. Composed originally for 16 soloists and orchestra, it is a lush, entirely English paean to music itself, and its choice suggested that the worst of the pandemic privations seemed to be over. Not quite over, though, as the version performed was one of Vaughan Williams’s own suggestions allowing for only four soloists (taking the genuinely solo lines), and a socially distanced group of the BBC Singers adding oomph to the ensemble sections. Elizabeth Llewellyn (soprano), Jess Dandy (mezzo), Allan Clayton (tenor) and Michael Mofidian (bass) all provided the full richness of tone that the text demands, and the whole was beautifully balanced for dynamic and timbre under Staskevska’s skilful direction. The audience’s hushed pause at the close said everything about the intense emotion generated by this most bewitching of works. 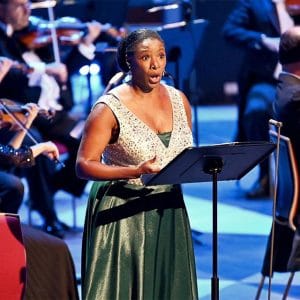 Music, when soft voices die, James MacMillan’s response to the Serenade, opened the second half. Scored for orchestra and four soloists it is a setting of two poems by Shelley: Mutability (the flower that smiles today) and the poem of the title. The lines of the first poem were divided between the three lower soloists, accompanied by orchestral susurration, with twinkling harp glissandi, alternating reflective and more agitato passages, all displaying MacMillan’s trademark broadened Scotch snaps, and plenty of melismas. An orchestral crescendo took the piece into a breathtaking statement of the second poem from the soprano (joined subsequently by the other voices) underscored by busy Minimalist orchestration reminiscent of John Adams’s earlier works. Again, the four soloists excelled in matching timbre and production to text.

“The bottle of musical bubbly opened for the occasion… was perfectly balanced for richness, sparkle and a touch of astringency…”

Poulenc’s 1938 concerto for organ, timpani and strings is always a crowd-pleaser. Set as a single movement, but with seven tempo markings, it requires not only virtuosic skill from the organist, but an understanding of how to make its textures sing to the best. Stasevska and the orchestra absolutely got this, and demonstrated a consummate skill in varying tempo and dynamic throughout, so that the mercurial moods of the work – from quiet French lyricism, through the Gothic and almost fairground qualities – zipped by, leaving delicious tastes in their wake. Daniel Hyde was playing the Albert Hall’s mighty keyboard monster, and clearly, he’d had plenty of time to study its registration possibilities, as he coaxed a wide range of colours out of the instrument, as well as displaying a relaxed virtuosity.

Sibelius’ second symphony is one of his most popular. Stasevska and the orchestra turned in a cracking performance, allowing all of the work’s quirkiness to shine, from the comforting throb of the opening movement, through the moodiness of the second, the energy and drive of the opening of the third (the return of this after the exquisite woodwind section came with a glorious thump) to that on-top-of-a-mountain radiant theme of the final movement.

Arguably, this was the best (certainly the most emotional) First Night this century.