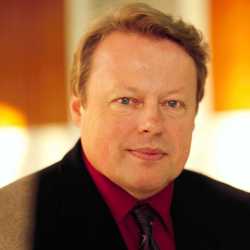 This weekend, Richard Hickox steps down as Principal Conductor of the BBC National Orchestra of Wales in two concerts that represent quite aptly the music that he has become most famous for interpreting.

Tomorrow, Bryn Terfel will sing the title part in Walton’s Belshazzar’s Feast as part of an all-English programme, but tonight we heard music from two Czech giants, plus the obligatory dash of Mozart.

The orchestral suite from Janácek’s The Cunning Little Vixen (edited by Charles Mackerras) contains over two-thirds of the music from Act 1 of the opera.

But out of the context of the theatre it makes a very dull piece indeed.

Yes, the strings created a suitably jagged texture at the opening; yes, the brass and winds were vivid. But without the drama, it sounds like twenty minutes of blandly pleasant film music of the 1930s. The second movement was slightly more vibrantly characterised, with the high piccolo twittering away to conjure up the opera’s farmyard setting, and solo oboe, flute and clarinet lines helped to evoke the country air. But the chaos of the act’s ending was too timidly suggested, the brass and violins only warming up for the final couple of bars.

The novelty act of the evening was Mozart’s Concerto for Two Pianos, K365. The soloists were Viennese pianist Till Fellner and our own Paul Lewis, who so impressed in Beethoven’s Emperor Concerto at the Barbican in April. This time around I was slightly less taken with Lewis, who had far less of a singing tone than Fellner. The latter also had a much better command of the classical lines of the music, bringing out inner voices with the utmost clarity, where Lewis sometimes fudged chords and in general lacked verve.

In the first movement there were some problems of coordination between the pianists, though they improved by the end. They both captured the character of the piece, quite delightfully at times, especially in passages of virtuosic arpeggios or the complex duetted cadenza in the opening movement. The central Andante lost pace and focus, and there was a most peculiar melodic turn that sounded like a mistake (though it was repeated in a later section, which suggests it was intentional). The finale was by far the most enjoyable of the three movements: the two pianists abandoned all precaution and whipped up some tension, whilst Hickox brought more bounce to the accompaniment. I thought it a shame, however, that he allowed the strings to use vibrato as this was probably responsible for the majority of the ritornello sections remaining rather anonymous.

After the interval, Dvorák’s Seventh Symphony was given a committed, if not particularly polished or rousing, performance by this fine orchestra and their outgoing Principal Conductor. The string sound was very beautiful in the opening movement, which also contained notable contributions from the secure horns in the B flat second subject group. The flutes and clarinet were all excellent, with the trombones adding to a passionate climax from the violins.

For me, the performance fell apart in the slow movement, which lacked architectural focus. We heard some nice lyric-pastoral gestures from the clarinet and horns, who were again excellent, and the oboe solo was elegiac. But the dynamic range was too narrow, and after a while the similarity of this dirgeful music became soporific.

However, the third movement had an appropriate dance-like swagger to it, and the finale allegro was exciting and climactic, ending with a massive timpani roll. In all, the orchestra did Hickox proud, even if they fell short of atmosphere in the end.