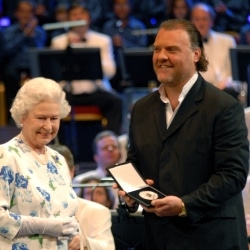 There could have been no better send-off for outgoing BBC National Orchestra of Wales Principal Conductor Richard Hickox than this rip-roaring performance of William Walton’s cantata Belshazzar’s Feast.

With the massed voices of the BBC National Chorus of Wales, Cr Caerdydd and the London Symphony Chorus, plus the London Brass and favourite Welsh bass-baritone Bryn Terfel, the BBC NOW lifted the roof in celebration of this highly-respected and intelligent conductor.

The Proms crowd loves this sort of extravaganza, and saluted Hickox with loud cheers at the end. Whereas last night’s prom was a little sedate, and even the first half of tonight’s lacked an edge of focus briefly, Belshazzar was played, sung and conducted with inspiration, and it was the highlight of the season so far.

When the BBC commissioned Walton to write the piece in 1929, they had in mind a small, chamber-like affair. But by the time it was finished two years later, the orchestration had become colossal, calling for two brass bands on side stages, an extensive choir and a commanding bass-baritone soloist with the power to project over the enormous assembled forces.

Bryn Terfel has these talents in spades, of course, and although his opening stanza was a little strained on the top, his second entry contained some of the best singing I’ve heard all year. Performing twelve lines of text a cappella (unaccompanied), Terfel brought the Lied-singer’s attention to detail to rhetorical patterns such as ‘Of precious stones, of pearls, of fine linen, of purple silk and scarlet’. Every word was audible in this massive hall, all the consonants were carefully pronounced, and Terfel actually engaged with the audience with his eyes and body too. Surely no-one present will ever forget his sizzling bellow of ‘Praise yethe god of gold’ nor the announcement of Belshazzar’s death.

The latter moment was also brought to life by the chorus’ chilling cry of ‘slain’, sounding indeed like the hand of God had been at work. The opening chorus got the piece off to an excellent start: dispensing temporarily with their scores, the tenors and basses focussed on Hickox’s detailed direction and pointed every word with care in this unaccompanied section. The sopranos were excellent in the ‘Babylon’ episode, while the closing three stanzas approached the mind-blowing in terms of intensity.

The orchestra, too, had some showcase moments atmospheric cellos after the opening chorus, bass clarinet in the first full chorus and the mounting tension of trumpet fanfares, mesmeric strings, the double bands and the cymbal coming together in the ‘Praise ye’ chorus.

The evening started with the best-of-British composers with which Hickox is perhaps most associated, Elgar and Bliss.

The Concert Overture In the South (Alassio) is an under-rated masterpiece, and here Hickox and his orchestra did Elgar proud. The opening flourish with bold brass and fluid strings moved through a melody of sunshine to the more melancholy oboe theme of the shepherd. The rising chromatic lines of the trombones were magnificent. Perhaps the solo viola was too underpowered to be fully enjoyed in its duet with the harp, and there was a loss of focus in the recapitulation, but these were minor points in a coherent performance.

Bliss was not the first to explore the notion of depicting colours in music (or ‘synaesthesia’) Wagner’s Tristan and various pieces by Schoenberg had already been there but his A Colour Symphony was perhaps the first to make it the main focus of the score. Yet for me, there’s not enough difference between his idea of ‘Purple’ and ‘Blue’ to sustain interest through both of these movements, and even ‘Red’ and ‘Green’ resort too much to pastiche or convention where the young composer ran out of ideas. The opening pomp of Purple eventually incorporated some darker musical colours, and the chamber-like use of the strings in four-part harmony was nicely timed.

Red almost belongs to the Proms: its closing bars are used in the opening titles of the concerts’ television coverage every year, which probably explains the smattering of applause after that movement (though its bobbing nature was nicely characterised by swaying strings and trilling piccolo).

If Blue was less interesting, then Green made up for it with its inventive and almost perverse use of a fugal outline (including a percussive section for two timpani players, brilliantly executed here).

Hickox is now the orchestra’s Conductor Laureate, and though he will be sorely missed after evenings as inspired as this one, it’s good to know that he’ll be back.