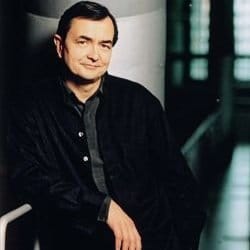 George Benjamin’s Dance Figures (2004) had its UK premiere at the Proms on Monday night. Prom 14 was a mixture of sub-standard performances and well-prepared delights.

As a fan of Haydn, I was looking forward to hearing the composer’s crisp, elegant style.

Instead, David Robertson led the wilting BBC Symphony Orchestra in an uninspiring and slightly dour representation of the master’s work which was almost as humid as the great hall in which it was being performed.

It seemed that the preparation of this offering had been low on the list of priorities for this evening’s concert. It is understandable, given that Benjamin’s Dance Figures needed, and by the sound of it got, the requisite attention; however the difficulty in performing a classical work so that it is transformed from a series of notes into a masterpiece seemed to have been underestimated. On top of that, Robertson pushed the tempo, which resulted in a sense of frantic haste that the dragging second violins and the imprecise wind entries only served to highlight.

George Benjamin’s superlative orchestral work was the first that he had ever written for dance. For influences he clearly drew on great masters such as Stravinsky. The Russian’s rhythmical violence from The Rite of Spring seemed to be unequivocally referenced.

Benjamin’s orchestration was ingeniously clear, allowing him to include a rich diversity of compositional techniques which showed expert understanding of the instruments under his charge. Each entry cut into the work’s texture with singular acuity. The mixture of textures, ranges, dynamic interest and rhythmical ingenuity made this premiere a resounding success.

Brahms’ Piano Concerto no. 1 in D minor Op. 15 (1854-8) had the good fortune of being performed by the formidable pianist Pierre-Laurent Aimard, who was able to do justice to the piece’s Romantic luminosity. Aimard’s sensual touch and intellectual interpretation seemed to inspire the orchestra, who played better than they did in the Haydn. Perhaps they were drawing on their impressive performance of the Benjamin. Unfortunately their entries still lacked unity the violins tended to have a less than rich tone and there were some very suspect musical phrases emerging from the winds.

Aimard’s playing of the Brahms bought out the golden rippling qualities of the solo part. It was a shame that it was unbalanced by the inconsistent wind section and the feeling of the whole orchestra being slightly unsynchronised. A highlight was the start of the rondo. Its vivacious energy cut into the restful silence of the fermata after the previously spiritual movement.

Benjamin and Aimard’s contribution to Prom 14 made it worth going to. Without them, however, it would have been frustratingly inadequate.