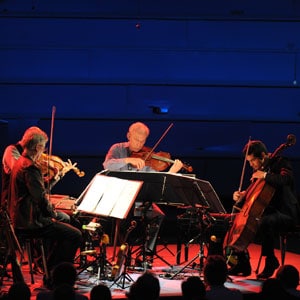 In a week where the Proms saw the continuation of the cycle of Beethoven symphonies and wider discussion centre on the lack of Mozart in this year’s programme, it was refreshing for one night to see focus directed back towards contemporary music.

Tuesday saw the pioneering Kronos Quartet make their debut at the Proms to perform one world premiere, one UK premiere and four works getting their Prom debut. Recent years have seen the Proms expand beyond their traditional classical boundaries to include concerts focusing on comedy, folk and world music and this late night show seemed to hint at yet another direction — one that combined diverse musical styles and distinct geographical worlds.

I’ll Prevent The Hunters From Hunting You, an arrangement of a piece by cult Syrian outsider-artist Omar Souleyman opened the night. Seeing his name on a Proms programme felt slightly incongruous, his unadulterated techno music being far more likely to be found at small outdoor festivals. The Kronos Quartet did well to preserve the rhythmical bounce and vibrancy of Souleyman’s electronic music (the unexpected vocal exclamation at the end also helping to re-align the piece with the original).

Sofia Gubaidulina’s String Quartet No. 4 provided some of the most intriguing moments of the evening, specifically the peculiar, pointillist sound made by small rubber balls being employed against the strings of each instrument. Played alongside scraped cello and sliding, creaking violins it had the effect of almost transporting the audience inside the instrument, experiencing the inner-workings of each in micro-detail. Ben Johnston’s subsequent String Quartet No. 4 ‘Amazing Grace’ sounded far more conventional in comparison, achieving a real purity and elegance of expression before moving towards denser, thornier terrain.

Canadian composer Nicole Lizée’s The Golden Age Of The Radiophonic Workshop (Fibre Optic Flowers) saw large tape reels, turntables and oscillators used alongside the traditional instrumentation of the quartet. The distorted rumbles and slowed-down, disembodied vocal fragments coming from the tape machines found a strange parallel in the playing of Kronos Quartet. There was no doubt that these inhabited the same alien world and together were successful in perpetuating the sense of ‘other’ that can still be felt in the music and influence of the Radiophonic Workshop today.

The arrangement of Tusen Tankar, a traditional Scandinavian folk song, offered a sobering follow up, the sad, yearning melodies inextricably wrapped up in the strings. Its melancholy power arguably elicited the greatest emotional response of the evening. This was a trait also present within …hold me, neighbor, in this storm… by Serbian composer Aleksandra Vrebalov. Bells, percussion, foot-stamps and throaty vocal utterances all contributed to its primal, visceral character. It was the most human and troubled of the pieces played tonight, possessing a real restlessness. The continued use of sounds relayed on tape to supplement the playing of the quartet might be uncomfortable for some traditionalists but added an extra dimension to the piece and suggested it will play a greater role in classical music of the future. The encore of Clint Mansell’s Death Is The Road To Awe reinforced this view, the layers of escalating tension from the quartet culminating with a blast of volume that usually is found at rock concerts.

The lack of any personnel changes or need for any stage reorganisation left little chance to pause, reflect and digest each piece, something which would have been beneficial. However, this seemed a minor complaint. The Royal Albert Hall may have been sparsely populated but those who stayed out late were rewarded with a selection of fascinating pieces from one of contemporary music’s most forward-looking and innovative ensembles.