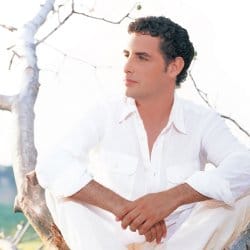 This prom had an intriguingly varied and unusual programme.

It was also Barry Wordsworth’s final appearance with the BBC Concert Orchestra as its principal conductor.

This and the presence of opera super-star Juan Diego Flórez suggested we were in store for a promising evening; the capacity audience full of millions of whooping and cheering fans also seemed to think so.

Well, there was an uplifting and lively start to the evening’s entertainment. The orchestra played the Overture from Rossini’s opera, The Barber of Seville. The musicians captured the laidback humour of exotic Spain yet presented it through the eyes of an Italian bystander. The performance had both drive and control, and the accelerando was skilfully managed.

Flórez entered the auditorium to do full justice to the aria Cessa di pi resistere from the same opera. Much of the time he delivered the phrases with brilliance, enunciating each coloratura run without labouring the notes, even if there were some instances where a higher quality of air speed would have helped to fill the sound. More care could also have been given to creating a sense of placement at the ends of some of the phrases, as these sometimes sounded rather heavy, as if Flórez was trying to overcompensate for the delicate quality his voice possesses. However, the lyric lines were sung with control and fluidity, and although his light voice was threatened to be swallowed by the immense space in which he was singing, it carried adequately enough.

After that flamboyant entry into the night’s proceedings, Donizetti’s Una furtive lagrima from L’elisir d’amore, was a lovely contrast. The sombre bassoon part was expertly played and the whole presentation was soothing yet emotive. It is a shame that the cavernous hall dissipated the intensity and sense of expectation set up by Flórez and the orchestra at the end of the piece, which resulted in a rather frustrating feeling that it had not reached its potential.

Flórez then had a break as the Intermezzo from Granados’ Goyescas was played. The winding descant slithered over the evocative tutti string melody. The passionate trumpet call was answered soothingly by the strings and the texture of the orchestration conjured up a hot Mediterranean haze.

Next, Flórez was again called on to continue his showcase with the dexterous Donizetti aria, Ah! Mes amis from La fille du regiment. He managed the awkward range and showy coloratura passages easily, and his top Cs were strong and clear almost without exception. It is just a shame that the flute and piccolo couldn’t stay together at the beginning.

So far, so good. The choice of material had been frivolous, but fun and well performed. However, the programmers then seemed to step off the well-trodden path to ill effect.

Falla’s piece, Nights in the Gardens of Spain (1911-15) was too long and although it was supposed to escalate to a scene of swirling skirts and snapping fans, to me, it really didn’t move very far from its thematically predictable start. It was a shame, as this piece started well with a strong sense of nationalistic impressionism.

The opening tremolos were expertly conducted by Wordsworth, who created the thick shimmering miasma of a wild, sweltering night. The atmosphere created mirrored the audience’s flapping fans and set the scene for the rippling light of the piano entry. Artur Pizarro impressed in the solo piano part, however he was unfortunately not given much of a chance to shine due to the heavy handedness of the horns.

Falla’s music is good and not without moments of genius. However, after the fast pace which opened the evening’s concert, the work’s heavy nature made the end of the first half drag, making the Albert Hall seem claustrophobic in the heat.

After the break there was still a lot on the menu. The second half started with Two Latin-American popular songs. One was from Cuba and called Aquellos ojos verdes (Those green eyes) by Menéndez and the other, México lindo (Beautiful Mexico) by Monge.

There are many absolutely wonderful and beautiful Latino melodies and I am sure that these two songs were prime examples. However, it was hard to hear that due to their terrible arrangements by Pea, who tried to scale up the usually modest size which would accompany this music. His attempt at creating an ‘authentic’ sound was to employ a few meagre hits of a clavé or scraps of a guiro. The raw sounds of these percussive instruments were also embarrassingly made to sound like intruders in an overly symphonic arrangement, whose original style did not suit masses of overly romanticised string tuttis.

Flórez sang melodramatically and without much sensitivity for the touching lyrics, and his voice was slightly muffled thanks to the use of amplification (although it was needed because of the large orchestra). The instrumental players seemed slightly unnerved and stiff.

There is certainly a case for presenting a Sinatra-like Northern American jazz style. But an evening which is supposed to celebrate the raw musical drive of Latin America is not such an occasion. The irresponsible way that this particular music was showcased only served to damage the reputations of both genres.

The other two Latin-American Popular Songs were by Gardel and arranged by Guinovart. They were El da que me quieras (The day you love me) and Jrame (Swear to me). These were better than the previous two and were slightly more sympathetically arranged.

The second half also included adequately-played dances from Falla’s The Three-Cornered Hat, and Espaa rhapsody for orchestra by Chabrier.