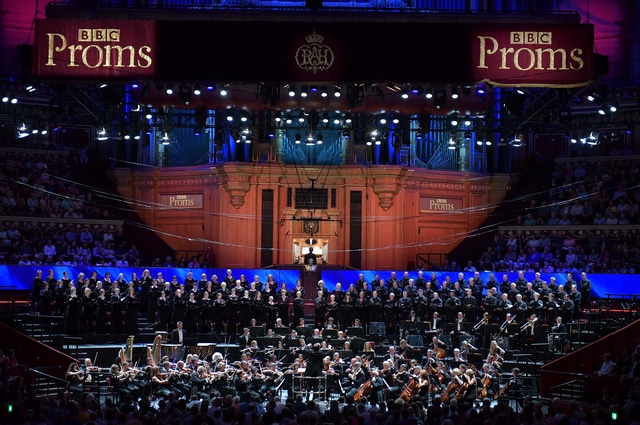 Tchaikovsky’s fantasy overture to The Tempest was his second Shakespeare-influenced piece of orchestral programme music, and it was given a first-rate performance at Tuesday night’s Prom by the BBC Symphony Orchestra under Sir Andrew Davis. Alas, notwithstanding the fine playing, the piece failed to take off – the fault here lying really with the composer. It is a vehicle that demonstrates Tchaikovsky’s technical skills – handling orchestration to perfection, and developing leitmotivs for the storm, the lovers, Ariel, Caliban and Prospero – but somehow it feels too technical, too deliberate. The concentration on perfect portrayal somehow means a loss of Tchaikovsky’s imaginative brilliance; there is no majesty here, no prickling of the skin for Ferdinand and Miranda that might echo the reaction to the rightly popular theme from the earlier Romeo and Juliet.

Anthony Payne’s commissioned Prom première Of Land, Sea and Sky is a fascinating choral and orchestral evocation of the geographical interaction of earth, air and water in six movements (with a prelude and postlude). The words are by the composer, and describe horses in the Camargue, the shifting enigma of the horizon, moving clouds, the clouds of gunsmoke over an otherwise idyllic summer Somme valley, and a towering tsunami encountered on a voyage. The orchestral colours were intelligently deployed – from the lush strings depicting a warm French afternoon, interrupted by a sinister martial snare drum, to the bubbling woodwind of cumulus clouds being formed, and the cataclysmic brass terror of a ship crashing into a wall of water. The choral statements too were deftly handled, with Payne deploying cluster chords (as, seemingly, do all contemporary choral works) but demonstrating good old-fashioned compositional technique through counterpoint and canon, as well as highly effective spoken passages (sometimes under a line sung by another part). It is certainly a work that demands further performances. 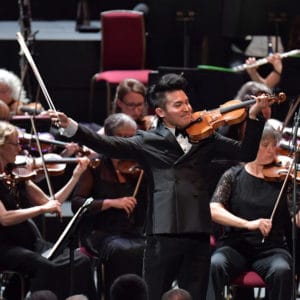 Bruch’s first violin concerto is certainly a crowd-pleaser, but, arguably, never has a Proms crowd been more pleased by a performance of the work. The soloist, Ray Chen, gave a stunning account of the piece that was brimming with all the emotional fervour that Bruch clearly intended when he wrote “the violin can sing a melody better than the piano can, and is the soul of music”. Chen eschewed printed music, and his communication with the audience and orchestra through glance and gesture served to augment the intimacy of the performance, and provide an elegantly balanced conversation with the other musicians on the stage. The violin itself (the 1725 ‘Joachim’ Stradivarius which once belonged to the Joseph Joachim, who premièred the piece) had a magnificently mellow tone that poured cream onto an already rich and delicious dessert.

Toward the Unknown Region was Vaughan Williams’ first essay at a large choral piece, and he chose to set words by  Walt Whitman, who depicts, in this section from his lengthy Leaves of Grass, the soul setting out on a mystical, non-Christian journey after death. This romantic English music is Davis’ heartland, and he and the orchestra did not disappoint. The lush orchestration was expertly controlled, and he held Vaughan Williams’ long crescendo in check throughout the piece, allowing the small choral victories (‘nor any bounds bounding us’) to be celebrated, finally granting the listener the catharsis of full chorus, orchestra and organ on “O joy!, O fruit of all!”.