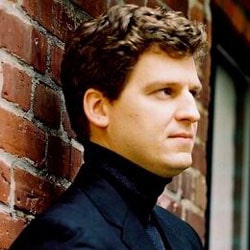 Marin Alsop is established as an American music specialist, so this program, her last Prom as principal conductor of the Bournemouth Symphony Orchestra, suited her down to the ground.

It also applied an effective contrast between the lyrical Violin Concerto of Samuel Barber and the vitality of Copland’s Third Symphony, one of the finest American essays in the genre.

The symphony’s last movement takes the famous Fanfare for the Common Man as its thematic material, representing a summation of what has gone before in the composer’s longest orchestral work. Alsop made this feel like a triumph hard won, impressing particularly in the detail she revealed beneath the surface.

The Bournemouth brass and percussion found the sharpness of the Scherzo, particularly in its hammer blows at the end, but she also followed the marking with simple expression’ to the letter in a taut opening movement. Though this tension relaxed somewhat in the Andantino, hindered here by a fusillade of coughing, the woodwind were particularly impressive as the sections interlocked. A distinct chill came to the discordant passage early in the last movement, dissipated only by a far-off piccolo solo, preparing the way for a terrific crescendo to end.

The Bournemouth Orchestra were well supported, and there was a deservedly generous reception for James Ehnes‘ interpretation of the Barber. Anyone wishing to go beyond the ubiquitous Adagio for Strings will find here a work bursting with charm and lyricism, which Ehnes found in a nicely understated first movement.

The gymnastics of the finale were safely negotiated, as Ehnes showed himself to be a most musical interpreter, if a little subtle at times in this Romantic work. The Andante exhibited all of its searching qualities, however, thanks to a soft grained string sound.

Rather than make this an all American affair, Beethoven muscled in with the third Leonore overture. Alsop took advantage of the opportunity for offstage trumpet calls, which lent a surprisingly haunting quality when introduced, but the exhilaration of the faster theme as it arrived was difficult for the Bournemouth strings to suppress. So too their conductor, whose feet practically left the ground as she immersed herself fully in the music.