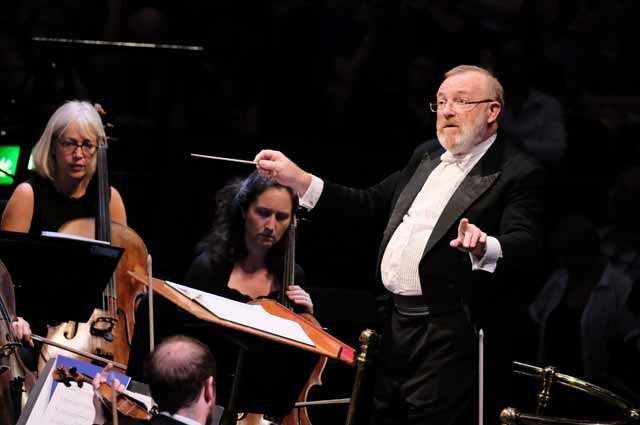 2018 is the last opportunity to mark the 100th anniversary of the Great War, and on Friday night the National Orchestra and Chorus of Wales conducted by Martyn Brabbins presented a moving and intuitive account of English music from before – and in response to – the conflict.

Parry’s 5th symphony (re-titled Symphonic Fantasia ‘1912’) is a seamless set of movements curiously titled ‘Stress’, ‘Love’, ‘Play’ and ‘Now’ that takes the listener on a journey through the sunny uplands prior to the arrival of darkness. Parry, here, is at his most playful (in the delicious burbling woodwind and almost Mahlerian Ländler of the third-movement scherzo) at his grandest (the brass of Empire in the first movement) and at his soupiest (in the almost-Elgar’s-Nimrod melody for cello and bass clarinet in the second movement). There were one or two shaky moments where the timings of the on-beat-off-beat sectional chords seemed not quite to gel, but by the time the classically Edwardian big-tune-with-triplet-underlay sounded out in the final movement, the orchestra was on top form.

Vaughan Williams’s The Lark Ascending represents a final pastoral moment before devastation, and it was given a glorious rendering – the orchestra at the opening and closing producing the quietest of pianissimos, and providing a sensitive underlay to the violin throughout. Tai Murray gave a first-rate performance, pulling every nuance out of the challenging solo. She is a surprisingly still player; watching her, you would imagine her to be working through a set of exercises – the bow always at 90 degrees to the strings; the violin never changing position. Every ounce of emotion is transferred to the music, as though the lark itself was taking flight, totally free from its earthbound avatar on stage.

Parry’s 1895 festival piece Hear my words, ye people had its first outing at the Proms. Sadly, it is never going to outclass Blest Pair of Sirens, as it is mostly a series of off-the-shelf 19th-century tropes that lead to Parry’s setting of the hymn O Praise Ye the Lord (which subsequently took on a life of its own). The performance was first-rate: the chorus crisp and well-blended, the organ and (added) brass not over-blown, the soloists perfectly voiced (Ashley Riches’ baritone had a well-judged vibrato that suggested an appropriately moustachioed Victorian artist; Francesca Chiejina’s soprano moved from a rich, weighty chest voice to honeyed tones at the top of her range), but somehow, it lacks the magic Parry spark.

Holst’s 1919 Ode to Death, however, was a horse of a very different colour. The composer’s response to the conflict, it is a setting of words by Whitman, that bring to mind the Franciscan attitude of welcome to kindly ‘Sister Death’. Although Holst employs his expected devices (odd-numbered time signatures, angular melodies) its English-pastoral voice is stronger than usual, and it is full of glorious clustered notes (the opening wafting chords ‘undulate round the world’), and there are some magnificent major-minor transitions. The chorus and orchestra carried all this off with consummate sensitivity (the unaccompanied chorus work in ‘And the soul turning to thee …’ was brilliantly handled) to produce the best piece of the evening.

Vaughan Williams’ 3rd symphony had its germination in the trenches, and although its inspiration is Flanders, its roots in English pastoralism summon a more English landscape. The orchestra rose to the challenge, bringing out well the composer’s occasional dissonant timbres in the orchestration, the warmth of the brass, the jolly Sir-John-in-Love folksiness and the flute’s re-ascent of the lark, the off-stage natural trumpet reminding us of the fallen, and Francesca Chiejina’s unearthly, unseen, closing soprano returning us to a chastened homeland.