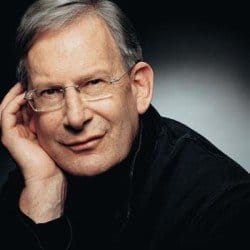 If one ever needed evidence that good performances of sacred music had healing properties, one need look no further than this evenings concert.

Apart from the most persistent cougher, I was rather pleased to notice that the coughing epidemic which plagues all concert halls seemed to have been cured for last night such must have been the power of the combined forces of His Majestys Sagbutts & Cornetts, the Monteverdi Choir, and the English Baroque Soloists.

Under the baton of Sir John Eliot Gardiner, the combined forces performed works by various 16th and 17th century composers, all of which were segregated by movements from Monteverdis Messa a 4 voci da cappella.

The oval-shaped Arena area enabled the different groups to stand in different places in the performing space, which acoustically made the evening even more interesting reminiscent of large forces being seated in different areas of a cathedral. This was not, however, always to the performers advantage. In the two Gabrieli sonatas, there were a few late entries from the orchestra players, probably due to the difficulty in not being in close proximity to each other. Also, the instrumental players did not use the same standard scale to tune, and this resulted in a few dodgy leading notes. Nonetheless, the chorales were played flawlessly, and the pristine sounds from the players were truly a joy to behold.

In Isaiah chapter 6, the Bible paints a picture of the angels singing, and I have always wondered what it would sound like. Perhaps listening to the Monteverdi Choir would not be too far off. The pure crystalline notes were nothing short of perfect, and the voice blending was simply amazing. The difference in frequencies of individual voices often causes disruptions and clashes, and makes it immensely difficult to unify voices, but I have rarely heard better voice ensemble.

The phrases were wonderfully done, and one could tell that for these singers, music is much more than a musty score. I do however have a small issue with the way some of the text is sung. The choir seems a bit more engrossed with the musical line than with the text, making Kyrie eleison (Lord have mercy) sound like a demand, and the harshness of some parts in the Benedictus did not always feel like a farewell blessing.

For the combined orchestral works, the performers gave us an evening we would not be able to forget anytime soon. Rigatti and Cavalli and Gabrieli have seldom sounded so exciting in recent times. Sir John Eliot Gardiners meticulous control of every single note was highly apparent one could tell by the way the singers and orchestral players treated each ornament with all the tender loving care in the world. Never once was there a note out of place, or an unintended accent, although it did slightly irritate me that the voices used vibrato and the violins did not.

In all, an amazing evening of the most beautiful sounds in the world, summed up by the brilliant heart-wrenching and earth-shattering performance and text of the Rigatti Magnificat Marys song of praise when she was told she would bear the baby Jesus. What must living in 16th and 17th Century Venice have been like, listening to such perfect singing week after week in church?