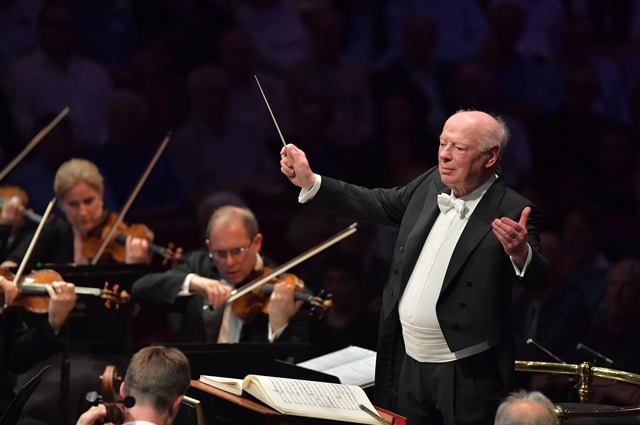 Every concert with Bernard Haitink on the podium is a special occasion. At this superlative Prom, there was extra cause for jubilation as the seemingly indefatigable maestro (who turned 87 this year) was conducting his 88th Prom and celebrating the 50th anniversary of his debut at the Proms. That he should choose to mark these auspicious milestones in his career with a performance of Mahler’s mammoth 3rd Symphony, at 100 minutes the longest in the standard repertoire, gives notice that he has no intention of resting on his laurels during his Indian summer.

Perfectly attuned to the tricky Royal Albert Hall acoustic, the opening theme on the horns gave notice that Haitink was fully aware that in these surroundings it needed a little more time to breathe, and from then on it became apparent that even though the tempo initially erred on the ‘stately’ side, given the overall span of the mighty first movement it seemed perfectly natural. The fact that the members of the London Symphony Orchestra evidently love working with Haitink was manifest in every bar and there were many notable solo contributions with Dudley Bright’s perfectly judged, eloquent trombone solos making their mark and deserving of unqualified praise.

Haitink and the players perfectly caught the bucolic aspects of the second movement, and it was refreshing to hear such an unforced and natural reading that was allowed to speak for itself without any unnecessary interventions from the podium. Woodwinds in particular excelled in their duties in bringing this woodland landscape to picturesque life.

The third movement was particularly memorable. This was down to the detail and clarity of texture that Haitink elicited, alongside Nicholas Betts’ mesmerising and beguiling playing of the off-stage flugelhorn. This really is Mahler at his most innovative and evocative, and Betts’ bewitching performance came close to perfection.

The slow, hushed introduction to the following movement was barely audible, admirably leading into Mahler’s glorious setting of Nietzsche’s text from Also Sprach Zarathustra, where mezzo-soprano Sarah Connolly’s gloriously sonorous ‘O Mensch! Gib acht!’ stopped the heart with its poignant beauty. Fresh from her triumph as Fricka in the Ring at Bayreuth she was in sovereign voice, deploying a wide range of vocal colours and in the process mined the depths of emotion that Mahler requires.

The boys from the Tiffin Boys’ Choir and the Ladies from the LSO Chorus were on ebullient form and both made fine contributions to the joyous choral outburst that follows, fading nicely into the sublime final movement that found the string section of the LSO providing some of the most glorious playing of the evening. Thankfully Haitink never allowed this movement to wallow in over-sentimentality, propelling it forward at a steady pace, yet letting rip in the closing pages, bringing the concert to a rousing conclusion.

Despite his sell-effacing nature, and ever the servant of the music, this was Haitink’s night. Combined with thrilling playing from the LSO, this will undoubtedly be one of the highlights of this year’s Proms.