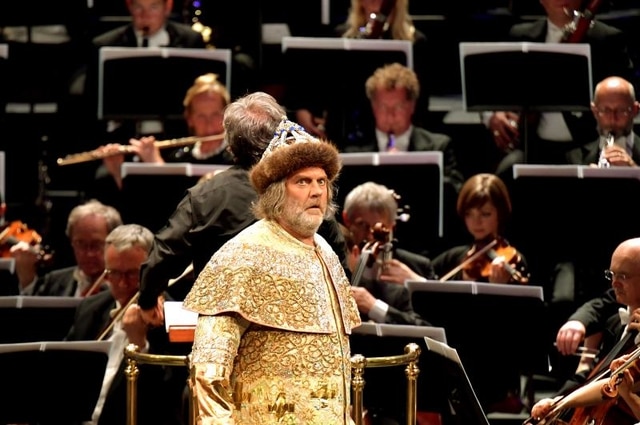 It is not often that we’d advocate the concert performance of an opera as preferable to a full staging, but to each rule there are exceptions. The presentation of Mussorgsky’s Boris Godunov by Antonio Pappano and the cast of the Royal Opera House production, however, allowed the full focus to rest upon the rarely performed original and condensed 1869 score. Whilst there can be no doubt that Rimsky-Korsakov’s intervention did much to keep Mussorgsky’s music in public view through his refined orchestral elaborations of the source material, it is to the source one must return if the full impact of Mussorgsky’s powerfully original voice is to be understood and appreciated.

Accepted critical wisdom has it that Mussorgsky knew what he wanted from his singers – particularly tenors and basses, whether in choral or solo roles – but was less certain in his handling of orchestral forces. It’s easy to agree with the first aspect of that assertion, but after hearing this admirable performance one would want to take issue with those who might deride Mussorgsky the orchestrator. It cannot be denied that his orchestration lacks polish at times, and this aspect was not shied away from by Pappano and the Royal Opera House orchestra.  The rough edges that characterise the strings especially add considerably to the dramatic impact that Mussorgsky went to significant lengths to convey through the union of his own libretto and music. Nowhere was this more evident than in the brooding leitmotifs that accompany Boris’ pivotal monologues at key moments in the opera: his coronation, his reflections upon his fruitless reign and his death. There is balance and delicacy within the orchestration too, in the monastery scene between Pimen and Grigory for example, where it cannot be denied that a distinctive atmosphere was brought to the drama. Pappano unified it all, driving the drama forward to create a single tableau across two and a quarter hours (there was no interval), yet he allowed the music to linger and create its own insinuations of character and intent between scenes also.

With the action largely portrayed within the constraining limits of the apron stage between the orchestra and the Royal Albert Hall’s arena, the cast projected the drama with the sole assistance of Nicky Gillibrand’s costumes.  For the most part the orchestral / vocal balance in the hall was, for once, near ideal – though the off-stage cathedral bells situated in the heights of the Gallery were apt to drown out everything that lay beneath.

With Bryn Terfel reprising his role debut as the tortured Tsar, the performance had at its core an artist fully in command of his artistic gifts. Terfel made Boris’ drama a very human one of vaulting ambition brought crashing down around him.  Thus, his self-confidence upon coronation, his anguish at the news of the rising of Pretender Dmitry to his throne and the descent into a tortured death as the Simpleton lays bare the dishonest means by which Boris attained his throne were all realised with vocal ease and acting skill. If Terfel’s bass-baritone did not have the inky blackness of timbre that a Russian bass might bring to the title role, he found a range of vocal shadings that afforded his realisation of Boris plenty of nuance.

The opera’s other standout roles, Pimen and Varlaam, were superbly sung by Ain Anger and Andreii Goniukov respectively.  Anger’s Pimen oozed noble resignation at his lot in life, whilst Goniukov’s Varlaam realised the only comic moments in tavern scene with a lightness of expression and delivery that got right to the heart of the character. Together the roles extensively rounded out the realisation that Mussorgsky innately had regarding the bass voice.

There was much of merit in the casting of other roles too. David Butt Philip’s Pretender Dmitry was firmly voiced and portrayed the role with a certain innocence, whilst John Graham-Hall’s Prince Shuisky articulated every intrigue to knowing effect with the clarity and care that befits such a character. Kostas Smoriginas’s Shchelkalov was robust of voice and purpose too. The well-known rebuttal to Mussorgsky that the opera lacked a reasonably important female role proved well founded, but that did not stop Russian soprano Vlada Borovko making the most of her single scene as Boris’ daughter Xenia. It would certainly be welcome to hear her assume more extensive repertoire in future. Rebecca de Pont Davies and Clarissa Meek brought a delightful rusticity to their portrayal of the Inn Hostess and Xenia’s nurse respectively. The Prommers rightly greeted Ben Knight’s assured boy treble Fyodor (amplified to cope with the hall’s expansive size) with much enthusiasm.

Throughout Boris Godunov  Mussorgsky is at his most personal and direct when giving voice to the people. The Royal Opera Chorus, under the direction of their outgoing Director Renato Balsadonna, were thrilling in every emotionally-laden contribution, playing a part of equal weight to any leading solo part.This second Prom of the 2016 season set the bar high for the forthcoming operatic offerings in the coming weeks at the Royal Albert Hall.