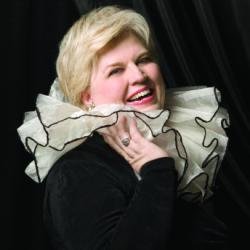 On the surface, Prom 21 appeared to be a rather random selection of works.

But scratch below the surface and a number of connecting themes are revealed.The night started with the Act 1 Prelude to Wagner’s The Mastersingers of Nuremberg.

To some, it may have seemed odd to start a celebration of the voice with an orchestral piece.

However, the Prelude was written by one of the masters of vocal music, and includes a wealth of song quotations, for example Walther’s Prize Song.

The music was wonderfully played by the BBC Symphony Orchestra and conducted by David Robertson. Its youthful passion and confident sound was a fitting opening to the evening, one of whose subjects was the strength of humanity. The often unheard triangle hit which marks the start of the build up to the Prelude‘s climactic end was clear and well timed. The only criticism is that the trombones seemed to be in a bit of a hurry. This may have had something to do with their distance from the main body of the orchestra which left them slightly exposed.

Michael Henry’s a capella composition, Stand (2005), featured a varied group of singers, all of whom had melodious voices even though they weren’t perfectly trained. This meant also that they had a wider range of timbres than you might usually find in a professional vocal group. However, they blended well together and the quality they produced enhanced the message they conveyed.

The piece simulated a musical representation of a protest for justice, and celebrated the people’s right to protest. The lyrics were an ensemble of quotes from famous orators, such as Nelson Mandela, Bertrand Russell, and Emmeline Pankhurst, and were put together by Tamsin Collison. The music effectively highlighted the text by combining recitative-like phrases over vocal drones. The clear diction of the singers and the wide range of pitches and vocal timbres helped to create the sense of a crowd.

Samuel Barber’s piece Knoxville: Summer of 1915, Op. 24 (1947: rev. 1950), is an exquisite work of reminiscence and heartache. The inaccuracy of the idealistic memory can be seen in the score’s fragility. This was brought out by Robertson’s evocation of harmonious suburban family living. Christine Brewer‘s mature soprano voice easily scaled the space of the Royal Albert Hall. She had a difficult part to sing. The high tessitura of the vocal line gave rise to a few small squeaks where Brewer attempted to shape words around high notes. However, considering the frequency with which the music makes the singer vulnerable to this particular problem, Brewer did admirably.

Sometimes, Orlando Gough has a hit and sometimes his ideas are a bit too harebrained to work. Prom 21’s second realisation of We Turned on the Light (the first having taken place earlier in the afternoon) was bang on the mark. This owed a lot to the marvellous lyrics of Caryl Churchill. They were a cutting comment on the global warming crisis. The poem begins with the usual ‘I-told-you-so’-like comments we are used to, but they are made in a cleverly poignant way, which emphasises the serious consequences of our frivolous needs.

For example:’We bought a new t-shirt/And turned the grass yellow’.

These comments were aggressively set off by Gough’s angry music. But, the most chilling and striking moments were in the ethereal final paragraph:

My ghost says: Not enough. It’s hard to love people far away in time.

The flowers are growing higher up the mountain.’

Moving and shocking, but will the audience ever be able to change that much? Perhaps Gough and Churchill should take their piece to perform to the Government.

Wagner is renowned for influencing Hollywood film composers. Therefore, there was a sense of balance that the night should end with a piece of music that was written for Eisenstein’s anti-Nazi film. Like Wagner’s music, Prokofiev’s Alexander Nevsky Cantata, Op. 78 (1938, arr. 1939) is on a grand scale. From the low, sombre introduction that gives rise to an image of a cold, oppressed ‘Russia under the Mongolian yoke,’ the cantata then continued with the impressive forces of the BBC Symphony Chorus and the Huddersfield Choral Society. The repetition of the emphatic vocal themes gave the music a definite forward feeling. The orchestra handled the complex rhythmic textures very well, with the help of Robertson’s clever directing.

However, the most impressive movement was undoubtedly the Valkyrie-like performance of the Russian mezzo-soprano, Elena Manistina in the penultimate movement The Field of the Dead. Her powerfully arresting voice created a rich atmosphere to the tragic story which she was narrating. The final movement could perhaps be seen as a topical comment on the current Middle East conflict, with its message ‘In our native land, no enemy shall survive.’