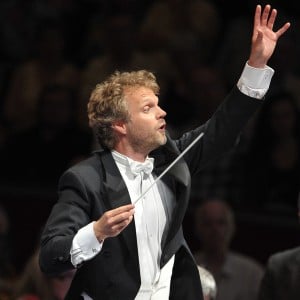 There was a distinctly Russian flavour to the BBC National Orchestra of Wales’ second Proms outing this season with its principal conductor Thomas Søndergård, although one bite of the evening was most definitely British. Prokofiev’s sublime Violin Concerto No. 2 in G minor rubbed shoulders with Shostakovich’s monumental Symphony No. 11, ‘The Year 1905’, while everything was started off with the UK premiere of Colin Matthews’ Turning Point, composed between 2003 and 2006.

Witnessing Søndergård wielding his baton for the Shostakovich, it became hard to believe how any Bolshevik could ever have perceived the work as triumphalist in its depiction of workers being defeated in the 1905 Revolution. Their interpretation was that it revealed the proletariat’s steadfast desire for freedom, and only its greater determination following defeat to achieve it, which paved the way for 1917.

As we listened to the opening harmonies for strings and harp, which were to reappear across the entire symphony in various guises, and Shostakovich’s take on various revolutionary songs, all of which expressed despair rather than hope, it was impossible not to feel overawed by the work’s shattering sense of anguish. This was an immensely powerful performance, but what was most surprising was that whatever the orchestra delivered it appeared as if Søndergård was asking for even more again. It was as if the orchestra was penetrating deep into Shostakovich’s intentions, but only Søndergård was reaching as far as the composer’s soul.

If it was impossible to ignore the subtexts in the symphony, almost the opposite was true of Prokofiev’s Violin Concerto. Many commentators have attempted to find messages of dissent within it, and they may well exist, but in Daniel Hope’s hands it did not seem necessary at least to identify any hidden messages in order to understand the piece. While it certainly played out as a multi-layered affair, the effectiveness of these layers could be explained in musical terms, the modest opening solo line contrasting with (for example) the Allegro ben marcato’s double- and even triple-stopping. The orchestra contributed handsomely to the performance, with the ‘clockwork’ Baroque accompaniment in the Andante assai proving especially effective, while there seemed to be a slightly raw quality to Hope’s playing that felt entirely befitting of the piece.

Colin Matthews’ Turning Point was so named because after seeing the second section develop as an even faster piece of music than the first, Matthews decided that a totally different direction was required for the third and final part. The result is an exceptionally well arranged piece that through its blending of assertive brass with free flowing strings proves as chirpy as it is hypnotic, but also conveys a wide range of other emotions such as agitation. It too was a great asset to this concert.

The BBC Proms continue every day until 7 September.