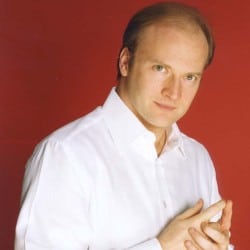 Prom 22 featured Haydn’s Mass in B flat major, ‘Heiligmesse’ (1796) and Schubert’s Symphony No. 9 in C major, ‘Great’ (1825-6). This prom included two of history’s most lyric composers, and promised to deliver a treat.

The Haydn began with a well directed Kyrie which led though to the Credo‘s rousingly climatic final ‘Amen’. Its polyphonic ending was set up by the well blended soloists whose strong voices resonated through the Royal Albert Hall.

The BBC Singers followed their impressive opening movements with a sublime Sanctus. Its magnificent dynamics ebbed and flowed through the movement’s chorale-like textures. The sopranos’ crystal-clear notes were unforced and were supported by the golden tones of Haydn’s beuatiful harmonic language.

The BBC Philharmonic played with rhythmic punctuation and a fresh tone under Gianandrea Noseda. This brought out the different musical strands during polyphonic sections and let the richer harmonies come through without being over-romanticised.

The Mass was ended by the jubilant voices of the BBC Singers resonating round the Hall.

A gentle and unobtrusive melody opened the Schubert symphony. It was interrupted by a boisterous yet amicable fanfare theme, the music of which led the orchestra into a vivacious and busy conclusion to the opening Andante.

Noseda’s style was neat and to the point. It brought out the mix of majesty in the brass and the light decoration composed throughout the string parts.

The second movement’s Andante put across equally charming, but harmonically darker thematic material. This was played fluently on the flutes who were answered by the suitably subtle strings. The musicians created a magical atmosphere which was offset by the staid horns’ simple repeated notes.

Then the extensive Scherzo and Trio began with an energetic theme in the lower register of the strings, before being taken over by equally vibrant, florid melodies.

Sensuous themes from the Andante were featured in this Scherzo movement, bringing warmth and tenderness. Noseda then brought the music to a dramatic close to head into the final movement.

The exciting Allegro vivace was performed with vigour and the intensity of movement which had pervaded the entire piece. The triumphant sounds were mixed ingeniously with comic efforts; for example, the ‘oom-pah’ rhythm which lightly supported the cheeky melody. The orchestra played stupendously and Noseda is to be commended on his careful preparation.