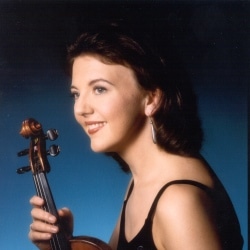 There was something of a family tree linking this BBC Philharmonic prom,exploring the teacher-pupil relationship from Rimsky-Korsakov toShostakovich by way of Glazunov. In doing so the chosen trio of worksprovided a satisfying blend of light and shade.

The light was irresistibly provided by Glazunov’s Violin Concerto,performed by Tasmin Little in a dress of vivid spring green. Itsuited the piece, though at first the signs were not good with theviolinist overcooking the vibrato on the rich opening theme, and partingcompany with the orchestra on more than one rallentando.

This was soon evened out, helped by Vassily Sinaisky‘ssympathetic pointing and shaping of the accompaniment, and as Littlesettled she secured a more lyrical turn of phrase. The cadenza inparticular was spot on, the lead in to the finale atmospherically weightedby the strings, the folksy themes then played with evident affection. Theodd tuning issue aside, Little was a strong advocate of this sunny, tunefulpiece.

The mood darkened after the interval as Sinaisky put together astunningly-played and striking account of Shostakovich’s wartimemasterpiece, better still than Bernard Haitink‘s performance withthe London Symphony Orchestra last year. A broadly expansive first movementincreasingly tightened its grip on proceedings, pointed all the whiletowards the naked fortissimo (in this performance carrying all before it);the ensuing desolation was profoundly moving.

The two ‘scherzo’ movements were driven but not rushed, the march-waltzconflict of the second movement nicely caught and the cutting edge of thesplintered third movement chords was exposed. As the shrill wind phrases raineddown the head-on impact of the passacaglia was shattering, with theresulting bass ostinato empty in response. Sinaisky judged the move to Cmajor for the last movement expertly, posing the question of just howcomfortable (or not) this supposed resolution might be.

This was a performance with many fine individual contributions –Gillian Callow‘s cor anglais, the bass clarinet of PhilipJones and Rachel Chatwin‘s piccolo stood out in particular – butSinaisky had the whole ensemble so well drilled and involved there wassimply not a weak link.

The opening overture to Rimsky-Korsakov’s The Maid of Pskov wasno trifle either, and gave a hint of the joys to come in nicely pointed,affectionate solos for clarinet and horn, along with the unusual harmoniclanguage of the opening, well treated by the conductor.

Another reason to envy Mancunian concert-goers – not only do they havethe Hallé, but the BBC’s northerly orchestra is also onscintillating form.