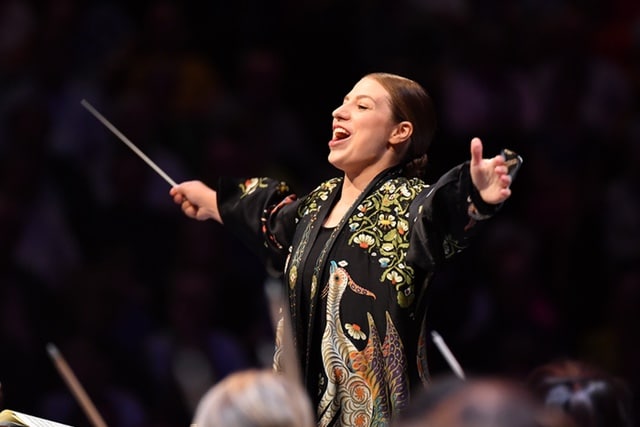 There’s a fluid grace to Dalia Stasevska’s conducting style: she uses gesture to the full, but it is underpinned by a sure and exacting beat and a steely control of the orchestral forces at her disposal.

Tuesday’s programme opened with the Karelia Suite by Stasevska’s countryman Jean Sibelius, in which she led the orchestra through a precisely controlled range of dynamics within an overall envelope that rarely rose above forte and remained exceedingly light on its feet. From the quiet opening of horns and muted trumpets the tension underlying the jolly pageantry of the first movement never let up, and only briefly was the orchestra let off its leash to deliver a fortissimo; the lyricism of the second movement was allowed to blossom, with a soft and yielding string-tone to the fore. The third movement, supposedly depicting a military victory, was a revelation: the soufflé-light touch applied created an effect far from martial, summoning instead Sibelius at his most pastoral, with even the brashness of the brass chorus sounding light and airy.

Works of the Polish/Soviet composer Mieczysław Weinberg are very seldom heard – indeed, this 100th anniversary of his birth sees the first Proms performances of any of his works (his third symphony makes an appearance on 22 August and a string quartet on 2 September). Weinberg’s cello concerto is a thing of beauty and needs to be up there with the Elgar and Dvořák concerti. Throughout the four movements, apart from a gloriously lyric cadenza in the third, the cello is inextricably entwined with the orchestra – as a whole, or in groups – in an exchange of musical material that give the piece, on occasion, the feel of a romantic concerto grosso.

The first movement is a gradually intensifying development of a simple-yet-bewitchingly lovely melody in which the solo cello is set mostly against the strings. The inner movements are more mercurial, featuring a sad little habañera in the brass, klezmer references, a gypsy waltz, some fairly furious bowing and pizzicato work from the soloist, and the aforementioned cadenza. In the fourth movement, the initial theme returns in a unison passage in the strings, and the concerto closes with some ethereal high-position work from the soloist. Stasevska’s subtlety with dynamic served the concerto well, stitching its occasionally disparate elements together into a seamless, multi-hued garment whose colours sparkled and dimmed. The Argentinian soloist Sol Gabetta is a champion of the work, and her complete mastery of it was obvious. Like Stasevska, she is a mistress of dynamic judiciousness: here was emotion and intensity, but there were no wasteful gestures, the tone of the cello blending where it needed to yet contrasting with either rich silkiness or metallic edginess where this was required.

For Tchaikovsky’s sixth symphony, the BBC Symphony Orchestra rose magnificently to the challenge of Stasevska’s shadings of speed and dynamic. Overall, it was a brisk performance: there was no wallowing for the ‘love theme’ in the first movement, the almost-waltz of the second tripped along, and the third movement was taken at a breathtaking pace. There was, though, no feeling of being hurried, as within this structure Stasevska used dynamic and orchestral texture inventively to maximise contrast: the work’s opening double-bass notes went almost unheard under audience murmur, with the quiet bassoon entry seeming almost a shock, and the briefly fortissimo crash later in the movement was earth-shattering. The swells and decays of the third movement were over in moments, but made, nonetheless an impression, and the final movement piled intensity upon intensity through the sheer weight of string-tone, without any need for slowing down.