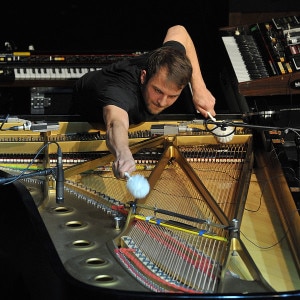 It has become commonplace for the Proms to explore music outside the traditional classical realm and this season’s programme continued this trend featuring shows curated by various BBC Radio channels. BBC Radio 6 Music’s late night concert, curated (and introduced on stage) by DJ Mary Anne Hobbs featured Nils Frahm and A Winged Victory For The Sullen, two acts that have built up respected reputations whilst releasing albums on the Erased Tapes label. They are also key names in a movement varyingly referred to as modern/neo/post-classical. In this sense it was this show that was closest musically to the core Proms programme (much was made in the lead up to how this pairing represented one possible future incarnation of classical music).

A Winged Victory For The Sullen are essentially multi-instrumentalists Dustin O’Halloran and Adam Wiltzie but tonight they also featured a string trio and players from London Brass. It’s always been possible to identify classical influences deep within their music – an Arvo Pärt-like economy of means, a Philip Glass-like minimalism, a Henryk Górecki-like solemnity and something approaching a Mahler-like scale.

They played six tracks from their latest album Atomos, immediately enveloping the hall in the sumptuous arcs and long, graceful waves that have come to define their music. A sense of still desolation ran through their set, overflowing with pathos but with seeds of hope tentatively breaking through. Olivier Messiaen may have written a String Quartet For The End Of Time but with A Winged Victory For The Sullen it’s as if they write string trios for the emergence of light. They were later joined on stage by dancers from Random Dance, the dance company of Wayne McGregor.

As the sublime Atomos VIII drew to a close Nils Frahm appeared on stage to perform a short new piece with them before launching into the swirling electronics of Says, arguably now his musical calling card. Frahm has been playing music like this for years (in the same way as the genre of modern classical has existed for years) but this track seems to have taken on a defining role for both him and the genre in recent times. It is as pristine as ever and still suggests the pulsing sounds of deep space and faraway worlds. It was followed by the intimate piano introspection of Berduxa.

It’s wrong however to focus exclusively on the classical link to his music. The slightly amended beginning to Hammers makes it sound as though it could have been released on the ECM jazz label, sounding cold and detached, before being  taken over by the sound of minimalist techno transposed to the piano. Due to the time restrictions in place it did feel a little over-condensed however (despite headlining Frahm was on stage for less time than AWVFTS).

We can be fairly confident it is the first time the Royal Albert Hall has seen a toilet brush deployed as a percussive instrument on (the appropriately named) Toilet Brush before the animated, dancing piano finale of More drew the evening to an end. It’s undoubtedly a special show, primarily because of the setting, but musically this is the norm for Nils Frahm – he displayed the level of consistency and accomplishment that we’ve seen in each of his previous shows. He’s had such a remarkable year (huge headline shows, film soundtracks, solo albums – not to mention coining an annual day to celebrate the piano) that it’s maybe natural to wonder how long his star can remain in the ascendancy. But nights like this very much confirm he still deals in tiny epiphanies, serving them up with endearing humility.