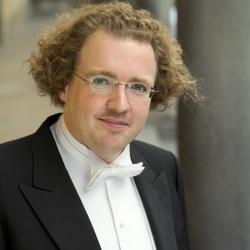 Contradiction seems to have been an important characteristic of this concert.

To start with, the name of the Royal Scottish National Orchestra puzzles me: how can it be Royal and National at the same time?

There might be other instances of this duality but the puzzle remains.

Ravel’s Mother Goose suite is a prime example of Ravel’s skills in instrumentation.

Nevertheless, it is arguable whether the original charming piece, written for the combined 4 hands of two young children, retains the child-like magic in this orchestral version. It, too, contains plenty of interest even for children (of whom I spotted several at this concert), such as cuckoo sounds in the second movement and exciting percussion solos in the third movement.

However, the vastness of the magnificent Royal Albert Hall made me wonder whether this delicate chamber music type of orchestral suite was a wise choice for the opening number in a concert given by a large symphony orchestra.

Admittedly, this piece gives a good chance to all wind soloists to shine and it allows the strings to demonstrate their accompanying abilities as well as their regular central function. French conductor Stephane Denéve, Music Director of the RSNO, gave us a sensitive rendering: presumably he grew up with the fairy-tales of Charles Perrault, which serve as the basis for the five pieces in the composition.

On first hearing, as it happened in my case, Szymanowski’s Symphonie concertante for piano and orchestra is not a work of truly high quality. Fortunately, pianist Piotr Anderszewski is – without doubt – an artist of very high quality. His poetic solo piano introduction, his sensitive accompaniment to orchestral soloists in the second movement, and his flexible but disciplined rhythmic nuances (that is rubato in the bar or agogics), all demonstrated an artist of high calibre. It was also wonderful to hear his melodic lines – and decorations within those lines – so well defined.

The Bartókian introduction (of piano and timpani) to the third movement made me wish that one of Bartok piano concertos had replaced the somewhat hybrid Szymanowski piece. I am not certain whether it was the composer’s or the conductor’s fault but several times the orchestra drowned out the piano part.

Berlioz’s normally exciting Symphonie fantastique was far from exciting. This time I am certain that the conductor was at fault. This concert was conductor Denéve’s Prom debut, so perhaps he was nervous. His beat was less then precise, thus causing untidy ensemble far too often. Sharp rhythms of Berlioz (such as the syncopation in the fourth movement) lacked bite, and important crescendo passages seem to have been ignored. Full marks to the orchestra for delivering the goods, even without well-defined direction. Brass and timpani sections were especially brave and good in the Dies Irae section.

To my mind, first timpani player Martin Gibson was one of the heroes of this concert. In particular, his highly musical playing in the second movement of the Szymanowski still sticks in my mind: his short duo with pianist Piotr Anderszewski was a model of ensemble playing.