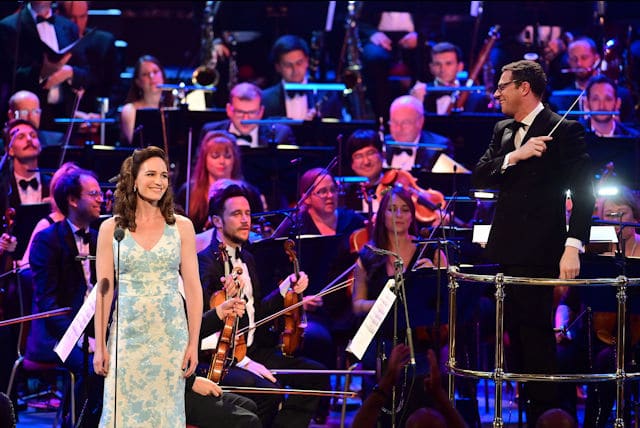 Friday’s matinée performance from the John Wilson Orchestra under their eponymous conductor was a tour de force, and arguably, the best Prom they have presented so far.

A trip through the output of the Warner Brothers’ studios music department from the Golden Age of movies to the present day allowed for a wide range of styles – from the classically influenced works of Erich Korngold (The Sea Hawk), Max Steiner (The Treasure of the Sierra Madre and Now Voyager) through Broadway-to-screen musicals such as Sigmund Romberg’s The Desert Song, Frederick Loewe’s Camelot and Sammy Fain’s Calamity Jane to the more jazz-influenced soundtracks by the likes of Harold Arlen (Blues in the Night) and Henry Mancini (Days of Wine and Roses).

And contrast was the watchword across the whole concert. The John Wilson Orchestra was out in full force, and this meant not only an opulent brass sound (the opening fanfare of The Sea Hawk; gloriously fat trombones in Seventy-Six Trombones), but a vast palette of timbral and dynamic combinations from which Wilson and the orchestra painted liberally. Wilson’s arrangement of the suite from Steiner’s Now Voyager contained an abundance of texture in itself: an opening lush string sound underpinning horns; lacy solos from violin and cello; a spooky cello-and-vibraphone pairing; a sudden Latin section from the saxophones; busy strings and a glockenspiel.

Alex North’s main title music from A Streetcar Named Desire served menace in several acoustic helpings: dark brass with a sinister string theme; a bluesy trumpet and screaming clarinet; a bitter little celesta waltz; staccato runs in strings and woodwind. Harps whooshed in Tiomkin’s The Old Man and the Sea; Auntie Mame was given a blowsy string waltz; and deft big-band saxophone work abounded in Gotta Have Me Go With You.

The folks at the sound desk worked miracles with the Albert Hall’s chancy sound system, such that the miked soloists and choir (The Maida Vale Singers) balanced well with the live orchestra.

Matt Ford took the lion’s share of the solos, and his light baritone delivered a cheeky Harold Hill for Seventy-Six Trombones, love-struck swains for If Ever I Would Leave You, The Desert Song and Blues in the Night, and gave us a hint of Tony Bennett for Days of Wine and Roses. He was less successful, however, with Get Me To The Church On Time, which needs the raspy inaccuracy of Stanley Holloway rather than the saucy fluency of Tommy Steele (albeit that a riff on the spoons offered earthy compensation!)

Louise Dearman’s husky soprano made for spot-on presentations of We’re in the Money and The Deadwood Stage, and her bluesy account of The Man That Got Away was top-notch. Mikaela Bennett sang Maria in last year’s West Side Story, and her return was welcome; her clear, full soprano voice came across brilliantly, and the delivery of It’s Magic (from Romance on the High Seas) and the Desert Song duet with Ford were heart-stopping. The Maida Vale Singers too were on top form, providing precise and nuanced choral backing throughout.

The finale, though, exceeded all expectations. The Constant Nymph is a somewhat neglected film, but Wilson and the orchestra’s account of its main song, Tomorrow, provided the perfect smiling-through-the-tears Hollywood ending: gongs, bells, lush strings, solid brass, a celestial chorus singing ‘oooh’ and ‘aaah’, a contralto soloist with richness and power (Kate Lindsey, who appeared for this one item, was utterly magnificent) and a final swell from full organ. After this, the encores (a neat rendering of I could have danced all night by Bennett and a swirl through Harry Potter) were lovely, but barely necessary.