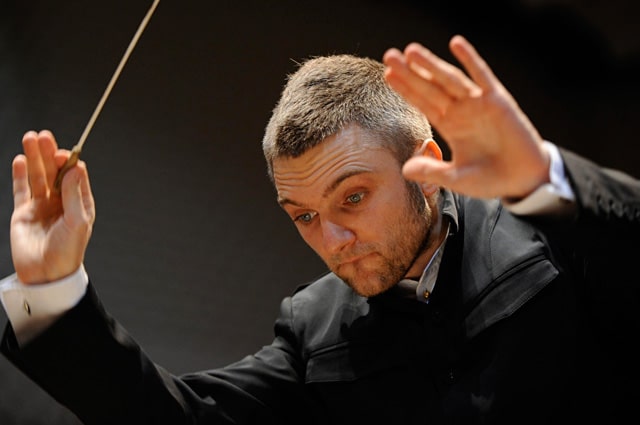 Audience members at Monday’s Prom could have been forgiven for thinking that they had arrived for the close of an earlier event, as the programming of Beethoven’s first symphony at the beginning of a concert otherwise dedicated to 20th-century works on the theme of mystery and otherworldliness seemed a touch ‘let’s-find-somewhere-to-stick-it’.

Nonetheless, the Haydn-influenced symphony was given a refreshingly chimeric rendering – performed at historically informed tempi by a full modern symphony orchestra incorporating period trumpets and timpani, the final character of the work sounded somewhere between a 1980s ‘authentic’ performance from the Hanover Band and The Berlin Philharmonic in the 1960s. Odd, but very likeable, reminding us that, as with Scarlatti performed on a piano, there is perhaps room for such quirky anachronisms in a post-modern age. Kirill Karabits coaxed a deal of sparkle and excitement from the Bournemouth Symphony orchestra, such that the slow movement was nicely mannered and there was plenty of energy and blustery brass in the other three.

Ironically (given that it was written to ensure the popularity of an underperformed opera), Richard Strauss’ Die Frau ohne Schatten: Symphonic Fantasy is rarely given an outing, which is a sad loss, as it highlights some of the material that often passes by unnoticed in the full stage-work. Strauss’ mercurial changes of tempo and texture are often difficult to deal with, and performances of his works can sometimes sound clunky, but Karabits and the orchestra were on top of their game, presenting us with a streamlined and shimmering fantasy-world delineated by scintillating harps and glockenspiels, lyrically romantic strings, and – towards the end – a magnificent trombone iteration of Barak’s theme underscored by warm brass.

It is surprising that Prokofiev’s war-inspired Seven, They Are Seven does not carry the same unlucky reputation musically as Macbeth does theatrically (perhaps this is why this was its première at the Proms). It is an eight-minute mad, brash invocation to seven Sumerian demons, set for large orchestra, tenor soloist and chorus. David Butt Philip took the role of the deranged tenor ‘High Priest’ and made it his own – at times almost screaming (but musically so) over the tempest being whipped up behind him. The orchestra and chorus (The National Youth Choir of Great Britain) gave equally terrifying – and terrific – performances, not least at the very end where the final conjuration was almost whispered over a rolling bass drum and low trombones – leading to the expectation of a smoking pit opening up in the Arena.

Walton’s Belshazzar’s Feast is a Proms favourite; it’s a big blowsy piece whose sound-world is best described as a military band gatecrashing a Bloomsbury-set party. In common with both of these groups, it requires a certain fussily camp attention to detail, and, alas, some of this was missing in the high-speed, high-octane performance it was given. The fortissimo-piano-crescendo choral entries that are an absolute hallmark of the piece were not as pronounced as they might have been, and some of the subtle changes in speed were missing; the ‘offstage’ brass bands were onstage throughout, which led to occasional swamping of the large chorus. Apart from these moments, every syllable from the well-trained National Youth Choir was audible, and they made a solid blended sound – especially effective in the unaccompanied semi-chorus section towards the end. James Rutherford was well-chosen for the bass solo: the hard edge to his rich tone gave him authority and portentousness in equal measure. All in all, though, it was a generally enjoyable account that was full of energy and drive, right through to the last cataclysmic full-organ, full-orchestra chord.