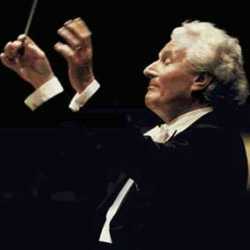 In the most impressive Prom of the season so far, Sir Colin Davis led the National Youth Orchestra of Great Britain in four works by three composers with whom the conductor has long been associated: Sibelius, Stravinsky and Janácek.

After some very questionable concerts in the opening weeks, with one or two jaded orchestras in particular, it was wondrous to witness this extraordinary group of young musicians revelling in the sheer act of making music.

The ultimate commendation has to go to Sir Colin who, after decades of leading the world’s greatest bands to great acclaim, brought a wealth of experience to inspire exuberance and excitement from the budding players.

At one time, Stravinsky was a key part of Davis’ repertoire but recently we’ve not heard him conduct much apart from The Firebird. So it was good to hear his rendition of the Symphony in Three Movements. The work was cobbled together in 1945 from bits of unused film scores written during Stravinsky’s years in Hollywood, but you’d never tell from the grand structure the composer creates. The orchestra began boldly, with timpani rolls and sombre trombones, before the strings came in with a series of stabbing, penetrating chords. 16 year old Duncan Ward was the impressive solo pianist, negotiating the syncopation of his part with finesse, whilst 17 year old Mark Simpson thrilled with his sumptuous playing of the solo clarinet part.

The quality of the string sound belies the players’ years, being warm and demonstrating well-controlled vibrato in the Andante. They also coped well with the complex chamber music-like effect tin the centre of this placid movement. Meanwhile, the final movement was notable for its bassoon and trombone duet. Overall, the performance was striking for the musicians’ innate sense of style and their precision in the jagged rhythms.

Following this, Janácek’s Taras Bulba provided an edge-of-the-seat conclusion to the first half. Loosely based on Gogol’s tale of the Ukrainian Cossack, the tone poem (or ‘rhapsody’, as he calls it) describes the death of Taras and his two sons one movement for each of them. The opening wind solos were superb, especially Suzanne Thorn‘s oboe, and although she wasn’t the most helpful leader, Charlotte Reid demonstrated some elegant phrasing in this piece particularly (it was her last concert in the orchestra). Swathes of sound created by a mass of violins were then overpowered by the enormous sound of the Albert Hall organ.

The Death of Ostap had an especial bite: the violin stabs and in particular the nimble harps (who shone all night) prepared the main death march, where double basses and trombones were interspersed through the surging string theme, ending with a mighty cymbal crash. The last movement, too, was striking, with an antiphonal effect between organ and orchestra blasting us into the interval in preparation for an equally intriguing second half.

Here we heard two works by Sibelius. First was the symphonic fantastia Pohjola’s Daughter, which tells of the attempted seduction of the daughter of the moon-god Pohjola by Väinämöinen, the wizard. He fails to meet her challenge, and rides away in humiliation. The magic of this 14-minute piece was brought to life with Davis’ usual energy. 18 year old Emily Francis provided a remarkable cello solo; flute trills and dancing violin octaves mixed with darker trombones and bassoon to conjure up the mystic story.

Finally, Sibelius’ Seventh Symphony was the ideal conclusion to the evening. Written in 1924, the piece has seven compositional areas but only one movement. Sibelius compared it to a river, in which the thoughts and motifs created the musical form, rather than segmented movements. Music of this kind can be difficult to shape, but Sir Colin’s attention to detail and the orchestra’s total trust in him resulted in a flawless performance. The opening was strikingly good timpani announced the main theme, which came with a brooding character in the strings and the Vivacissimo was memorable for its minor-key version of the dark trombone theme at the centre of a complex soundscape. The remaining sections were similarly well-crafted, the strings’ focused tone and the horns’ security (despite one brief blip) two highlights in a tremendous performance.

Overall, one could not have expected more from the ensemble than they gave us.