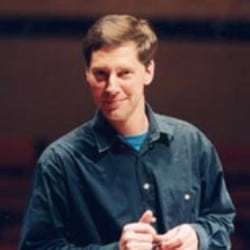 Given the Albert Hall is the acoustic equivalent of a large and loftychurch, it seems entirely appropriate to perform sacred works in the venue.

Robert King and his forces utilised the space to their advantage,yet managed still to detail each musical statement of a subtly upliftingevening.

Their programme was most appropriate, with a first half that not onlycommemorated the bicentenary of Michael Haydn’s death but gave them achance to revisit a work which caused quite a stir when recorded last year,this combination of soloists and ensemble winning several awards.

TheRequiem, an intensely personal response to the text, was used at thefuneral service of Michael’s brother Franz Joseph, the famed of the two.Its vivid word painting was highlighted by King, whether the descent intohell in Domine Jesu or the reverent hush with which CarolynSampson sang Lux Aeterna.

Such magical moments were a result of clear chemistry between King andhis four soloists, though James Gilchrist was noticeably louder thanthe other three in his solo episodes. Mezzo Hilary Summers sang withdepth and authority, while bass Peter Harvey was poised and lucid.Haydn’s fugal writing was perfectly balanced throughout the choir, with theresulting textures expertly matched by the orchestra.

With a resolute ending in the major key Haydn had moved us from darknessto light, and there we stayed for the second half, which began with aperformance of Mozart’s wonderful Paris symphony. King’s attentionto phrasing in the incisive, brisk opening was a treat, as was the wayMozart’s themes carried between instruments, never falling flat, with firstand second violins maintaining impressive unison. This approach worked wellin a light-fingered slow movement and the fluttering violins with which theFinale began, answered by a vigorous tutti as King awkwardly swayed on hispodium.

The conductor’s distinctive method carried over to a superb performance of theCoronation Mass, and it was here that Sampson came into her own.Whereas her very opening notes in the Haydn had perhaps too much vibrato, sheexhibited stunning control for the Agnus Dei, a magical moment whereone could have heard a pin drop. The choir, immaculately rehearsed, sang anaffirmative ‘Amen’ in the Gloria as King thrust the music forwards,while their urgency in the Benedictus contrasted appropriately withthe legato writing for solo quartet.

The balance between choir and orchestra was well nigh perfect – quite anachievement in the hall – and we were still able to hear and enjoy theinstrumental detail. A fine achievement all round.