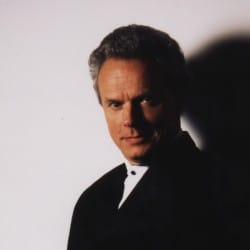 Yan Pascal Tortelier’s directorship of the BBC Philharmonic in the 1990s was a golden time for Manchester concert goers.

Now the orchestra’s Conductor Laureate, he led them in a Prom consisting of music by three leading French composers of the twentieth century.

It’s music close to Tortelier’s heart, and his inherent charm and elegance on the podium never failed to inspire the orchestra to evoke an appropriate French style and colour.

But the programme was oddly fragmented, with only four short pieces, three of them lasting only 15 minutes each. And the repertoire wasn’t exactly inspired, either, even if it was nice to get away from Shostakovich at last there was little contrast in the concert, however exquisitely most of it was played.

Ravel’s Rapsodie espagnole took a long time to warm up: the performance had everything but inspiration until the final movement. I was impressed with the finely-tuned Prélude la nuit, Tortelier creating a careful crescendo through the four-note ostinato, giving the clarinet cadenza space to breathe and ensuring rhythmic precision throughout the work. But the tutti sections were half-hearted, to say the least.

The Malaguea lacked the sultry characteristic described in the programme note, though again it was strong on detail (a lucid double bass pattern at the opening, for instance). And the Habanera was correct, down to the distant trumpet calls and violin slides, but it had none of the swell and swagger of the dance. Principal trumpeter Jamie Prophet was superb all night, but never more so than in the excellent finale, Feria, in which there was a better mixture of the exotic (a sexy cor anglais solo) and the dramatic (wider dynamic contrasts in the string tuttis).

Following this, Henri Dutilleux’s Métaboles seemed like a cloudy series of orchestral effects. However beautiful he really does achieve his aim of demonstrating the luminosity of the orchestra (it was written for the Cleveland Orchestra) the piece’s architecture is too elusive to keep the mind engaged on the music. The five named movements all run into one another without stopping unhelpfully so, in my view. Principal clarinettist John Bradbury showed unstoppable virtuosity in his high-voltage solo, and I appreciated the idea of having the high piccolo and low double basses frame the orchestral texture by playing sustained Es.

But did it really work? After a while, the music seemed to be going nowhere. The second section was apparently meant to evoke Bartók, but its (admittedly complex) string layers seemed far too vague in this performance to evoke the great musical architect of Hungary. Obsessionnel, the middle movement, showed off the BBC Phil’s magnificent brass section at its best, but the obsession of the title was its downfall: it seemed like it might never end. The remaining movements picked up somewhat, with both the tuned percussion and timpani adding some contrasts, but overall the work gained little reaction from the audience (which was very small, the hall being half-empty).

Disappointment of disappointments was the indisposition of Dame Felicity Lott, who was to have sung Ravel’s Shéhérazade. It was admirable of American mezzo Denyce Graves to stand in at very short notice, and she acquitted herself well enough under the circumstances. Her musky tone and exotic appearance certainly lent something to the three poems about the mysterious princess. However, as I’ve noticed with her before, Graves has intonation problems, often connected with her excessive vibrato (which can turn to a wobble). Her French was also suspicious, which is perhaps forgivable under the circumstances, but it was hard to avoid the fact that she was producing quite the wrong vowel sounds in many cases.

Asia is the most substantial of the three movements, and it was also the most successful in this performance. Ravel’s orchestration is at his most inspired here, so we got floating flutes on the words ‘purple sails’, harps and timpani excelling in a description of the isles of flowers and the song of the brutal sea, and sensuous string lines in an evocation of ‘eyes dark with love’ (though here the singer’s tuning fell off). It surprised me that the solo flute used as a literal allegory in The Enchanted Flute drowned Graves out much of the time; the part was beautifully played with long phrases by flautist Kevin Gowland. The Indifferent One also showed off the orchestra’s strong wind section, with the cor anglais standing out particularly, but sadly Graves’ tuning problems continued, and she indeed seemed indifferent to the drama of the text.

Albert Roussel’s Symphony No. 3 finished the concert off with fireworks, to say the least. Tortelier evidently sensed that something was missing, so he strode onto the platform and (literally) jumped straight in with the opening movement. The piece is masses of fun, and not at all deep or intellectually stimulating, which turned out to be a relief: it was the most vibrant performance of the night. The impending doom of the opening martial movement, complete with gong sweeps; the rich low string register of the Adagio; the cymbal crashes of the fleet-of-foot Vivace; and the finale’s magnificent climax and surprise ending: all were stirring, and after so much French opium, it was nice to come to earth with a piece of efficient, lightweight entertainment.