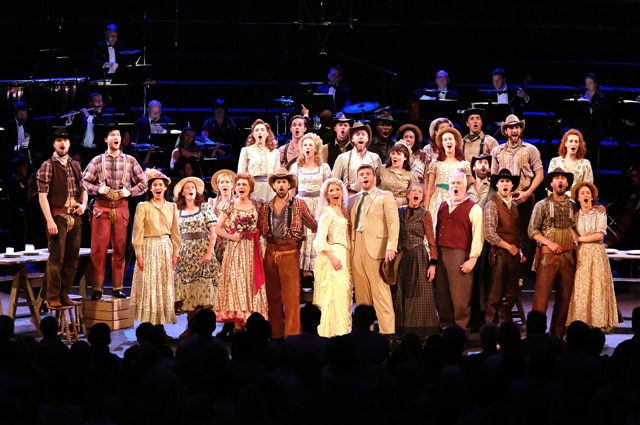 Popular as these Broadway-style Proms are, they present a challenge, as the Royal Albert Hall doesn’t respond well to spoken dialogue – the sound system isn’t always on top form, and the shape of the building makes for indistinct words. And so it was on Friday afternoon for the staged Prom of Rodgers and Hammerstein’s first Broadway hit, Oklahoma!: the performers were all miked, but the spoken sections were difficult to follow. The raspy character voices came across well: Belinda Lang (as a splendidly ornery Aunt Eller) and Marcus Brigstocke (playing Ali Hakim in scratchy tones straight out of Boardwalk Empire) were clearly audible, but the more soft-edged voices of some of the major protagonists had a tendency to be lost (doubtless the sound-balanced broadcast will be a more rewarding experience).

The acting was generally of good quality, and the simple, adaptable set (complemented by scenery splashed onto the LED diorama at the back of stage) worked well. Of the physical components, it was Alistair David’s choreography that drew the eye: balletically strutting cowhands in ‘Kansas City’, flouncing farmgirls in ‘Many A New Day’, and an elegantly worked dream sequence in which Jud’s saucy postcards came to life as red-and-black Vaudeville sex-kitten chorines. 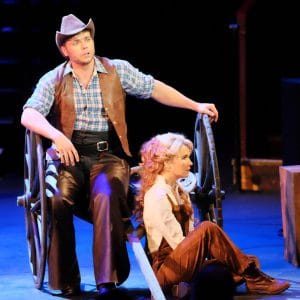 The singing voices were a mixed bag. Nathaniel Hackmann (playing Curly) has a warm baritone register, enhanced by higher overtones, but at the top of his range he was inclined to become thin and breathy; the floated notes in the quieter passages of ‘Surrey With A Fringe On Top’ were lovely, but when power was applied, the strength was lost. Scarlett Strallen’s all-pervading vibrato, alas, made Laurey sound more like 60 than 20 – indeed, many of the female chorus displayed a similar style, such that the production occasionally felt as though it had strayed into an am-dram performance of Gilbert and Sullivan complete with ageing ‘little maids’; perhaps this was a nod to the Broadway style of yesteryear, but it was not always pleasant.

It was left to the supporting roles to provide more enjoyable vocal colour: Lizzy Connolly’s edgy soubrette voice made for a perfect ‘I Cain’t Say No’ from the dizzy Ado Annie, and Robert Fairchild as Will Parker proved that not only could he dance (his tap routine at the end of ‘Kansas City finished in an elegantly controlled fouetté), but that he could sing well – his focused baritone in the same number provided the right amount of punchy delivery. The best voice on stage was probably David Seadon-Young’s, and it was a pity that, as Jud Fry, he got only one solo number (‘Lonely Room’). The ensemble pieces worked well, as the solid male chorus compensated for some of the wobble of the female voices, and the title number of the musical was the highlight it should be.

The out-and-out star of the show, though, was the John Wilson Orchestra itself. Wilson conducts with a neat style full of precise gesture, and he gets every nuance out of his instrumentalists – from velvety strings in ‘Oh What A Beautiful Mornin’’ to the haunting little solo instrumental passages in the mood-music throughout. Indeed, one felt that simply listening to an instrumental version of the show would have been a delight in itself – and it is perhaps this that pointed up the flaw in the programming. The musical-theatre-trained singers would have been highlighted by a smaller, subtler pit-band, in a more intimate theatre-performance, but they were outmatched at every turn by the brilliance of the sound coming from behind them.