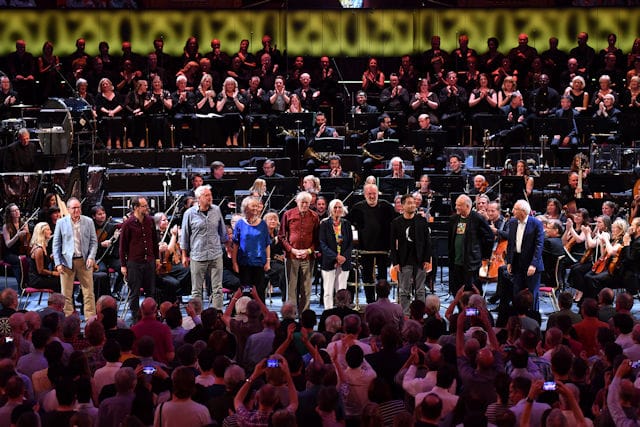 The conductor Martyn Brabbins turned 60 recently, and to mark the occasion, fifteen of his composer friends were asked to create a set of variations on an original theme, echoing, in a witty inversion, Elgar’s Enigma set, both to be performed at this year’s Proms under Brabbins’ direction.

The compliment is richly deserved, as Brabbins is not only a much-loved champion of contemporary music, but a peerless interpreter of English Romanticism.

The latter was self-evident from his account of the Elgar at the close of the concert. Under his baton the BBC Scottish Symphony Orchestra produced a performance that was full of gradations of colour, allowing headroom for Elgar’s subtle writing for instruments within the texture – the contrabassoon in ‘R.B.T’., the viola solo in ‘Dorabella’, the astonishingly quiet clarinet in ‘*** Romanza’. The dynamic control was tight throughout, such that the fortissimo moments – the raspy brass in ‘G.R.S.’, for example, and the stormy whoosh of timps in ‘Troyte’ – were few but startlingly dramatic.

The parameters set for Pictured Within: Birthday Variations for M.C.B. ensured that, despite the disparately styled contributions, it hung together extremely well. Each composer had been given one of Elgar’s fourteen variations to serve as a model, and, in tribute to Elgar’s teasing enigma, an unnamed composer provided the initial theme. Although this theme was complex, angular and somewhat difficult to remember, a pleasingly contrasted whole resulted. The blustery ‘W.M.B’ was interpreted by Colin Matthews in agitato strings and a screamy clarinet; Iris ter Schiphorst gave us the solid ‘boomph’ of a great machine contrasting with ethereal strings for the fifth variation. Kalevi Aho, for Variation 12 chose to spell out Brabbins’ name in the notes of the cello solo that is the feature of its Elgarian partner variation, B.G.N.

Dorabella’s flickering woodwind was mirrored in Judith Weir’s ‘Sixty Salutations’, which set sixty similar flutters against a tread of brass and wind with little horn fanfares. Gavin Bryars’ response to the brassiness of ‘G.R.S.’ was an uncharacteristically blowsy piece, full of the roll of strings and brass climaxes. Wim Hendericx presented a big-band jazz-fusion interpretation of Variation 7 in which fat trombones, up-tempo drum-and-brush-cymbal work and a bluesy clarinet featured. Sir Harrison Birtwistle was chosen to shadow Nimrod, whose character he undertook with characteristic quirkiness, choosing to focus on the prevalent minor third to produce a variation full of his trademark oblique and directionless musings.

It seemed only appropriate that Ralph Vaughan Williams’ tribute work Serenade to Music should also be included in the programme, and Brabbins engineered a supremely subtle account of this, choosing the version for orchestra, chorus and four soloists to get the most out of the dynamic contrasts of the work. Nadine Benjamin’s soprano was clarion-like for ‘How many things by season season’d are’ and exquisitely caressing for ‘sweet harmony’; David Ireland’s bass moments were clear and solid across the range required; and Idunnu Münch gave us the creamiest, most resonantly rich mezzo lines (it would have been lovely to hear her sing Brahms’ Alto Rhapsody in place of the Song of Destiny programmed). Although his English lyric tenor tone was spot-on for the work, William Morgan could have given more turbocharge on ‘Still quiring …’.

The choir (the BBC Singers and members of the ENO chorus), who had produced a finespun and blended sound for the Vaughan Williams let it go a little in Brahms’ Song of Destiny. The orchestral shadings were meticulously controlled, and the musicianship of the chorus was impeccable, but the louder choral moments had about them the over-spread timbre of a regional choral society of yesteryear.