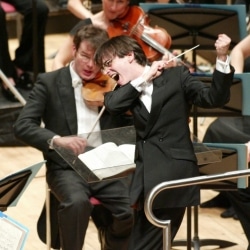 In the third of their four Proms this year, the BBC Scottish Symphony Orchestra presented a broad programme featuring works by Mozart, Schumann and Jonathan Harvey.

The latter’s enigmatically-entitled towards a pure land received its London premiere, having been specially written for the orchestra last year (the first of three commissions as Composer-in-Association).

Enigmatic, too, was its musical substance, which seemed to me to consist merely of seventeen minutes of textural contrasts.

High strings sustain long notes as quietly as possible followed by the full percussion section whacking and banging their instruments at full pelt, then back to the barely-audible strings. Ten minutes into the work, people all around me were flicking through their programmes, restless at the apparent absence of structure. Harvey’s programme note was no help either, informing us that, ‘The centre itself is not solid, rather it is an emptiness, an empty presence’. This characterised the work as a whole: mysterious and curiously unengaging. There were some nicely-judged string crescendi and the bassoon had an impressive solo, but on the whole the orchestra seemed tense at the music’s demands; it never took off. And why have the Proms gone in for pretentious red coloured lighting so much this year?

The opening ritornello of Mozart’s Piano Concerto No 25, which followed, positively fizzed with energy. The orchestra was evidently relieved to be back on safe, diatonic territory. Unfortunately the performance was too safe on the whole, and in the first movement the ensemble seemed rather string-heavy. Stephen Kovacevich was the soloist, and although his ringing tone is perfect for Mozart, his pedantic way of playing around with melodic material is a problem. His pedalling was highly questionable, sometimes clouding dissonant and consonant notes into one, and he often seemed to be more at the edge of the note than the centre.

Even more problematic was the cadenza, which was his own invention. Here, Kovacevich’s tone was delightful again, but it was unclear why the majority of the improvisation was in the same high register. In addition, the cadenza was four bars too long, leaving an uneven phrase structure, and the style of the music was incongruent: it suddenly shifted to something that sounded more typical of the nineteenth century in this section.

The slow movement was the worst of the three: it was understated to the point of feeling enervated by the end, despite a delightful moment when the bassoon doubles the piano. The third movement began more briskly and with a sprightly edge for the first time. But the tempo was too ambitious, resulting in a number of mistakes in a passage of broken chords, for example. There were other imprecisions due to the speed. However, it was overall a reasonable performance with some moments of instrumental beauty from the orchestra.

By far the most successful performance of the night was given to Schumann’s Symphony No 3, the ‘Rhenish’. It was still fairly bland, with harmonic tensions often left unnoticed and melodic undulations played without nuance, but the orchestra was at its best in this piece.

The first movement is a bit too much like a Beethovenian pastiche to be an outright masterpiece, and it suffered here from the ensemble’s lack of bite, particularly in the strings. The violins were shown off to better effect in the second movement, where their fine textures underlaid a subtle trumpet and horn dialogue. The slow movement, as with the Mozart, was just dull: there was no sculpture of dissonance and consonance within a melody, for instance.

Yet the fourth movement was fascinating, being based on a baroque contrapuntal principle. The subject begins in the dark-toned trombones, with pizzicato string accompaniment and horn harmonies. The theme develops and the trombones pass it on to the violins, who play it more subtly with the help of clarinet and flute. The orchestra understood these details and revelled in the invention.

The finale was also accomplished, with sprightly string flourishes and a particularly good turn from the principal trumpeter. It was not enough, however, to make up for the disappointments of the concert’s first half.