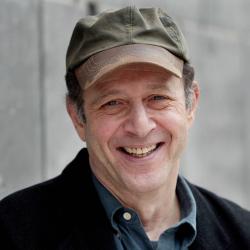 2006 is a big year for fans of Steve Reich, with a major 70th birthdayretrospective due at the Barbican this October.

Ahead of that, thiscommemorative Prom gave the strongest possible advocation of hisdistinctive compositional style, both in programming and execution.

The choice of repertoire, from the brief to the expansive, demonstratedthe versatility of Reich’s development process, superior to his fellow’minimalists’ in its ability to sustain interest, keeping the melodic andrhythmic material fresh.

Not that there was any melody in the famous Clapping Music, castas curtain raiser for two pairs of hands. In mildly amplified form it wasremarkably clear in the Albert Hall, its rhythmic vitality evident throughthe capable palms of Colin Currie and Sam Walton (notRichard Benjafield, as billed in the programme).

The two then took up positions as if about to engage in a game of tabletennis, facing each other for Nagoya Marimbas, where the mellowsonority of the wooden instrument’s lower register was put to good use.

As the structures became gradually more substantial, the warm, hazytextures of Music for Mallet Instruments, Voices and Organ werenext. Reich’s subtle elongation of the vocal lines was expertly handled bySynergy‘s three female singers, their striking purity of tonecomplemented by the busy metallophone and marimbas, while AndrewCottee‘s sustained organ notes gave the piece its foundations.

These three pieces provided the perfect extended up beat to 1970’sseminal Drumming, its impact twofold when presented live, with achance to enjoy either the overall texture or to focus more intently on onedeveloping cell. Drumming‘s four sections moved from the outrightpercussive, in the form of four soloists on pitched bongos, through thesofter wooden tones of the marimbas to the shrill metallic ring of theglockenspiels, coloured now and then by immaculate vocals and piccolo,which was unevenly amplified. The final, thrilling section united all foursections.

The virtuosity from the thirteen musicians was stunning, the stage awhir of activity as sticks rose and fell with rapid precision, the communalinterplay of the piece visually striking. At one point all ninepercussionists were reaching the higher registers of the marimbas in anexultant climax to the second section. The ensemble found a cumulativeexpression, moving seamlessly between sections, and fully deserved therapturous ovation (non-rhythmic, of course!) from a generously filledhall.

Not only well planned and delivered, Reich’s music also proved onceagain its suitability for the nocturnal hours, with the warmth of Musicfor Mallet Instruments and the hypnotic clarity of Drumming bothwonderfully portrayed.