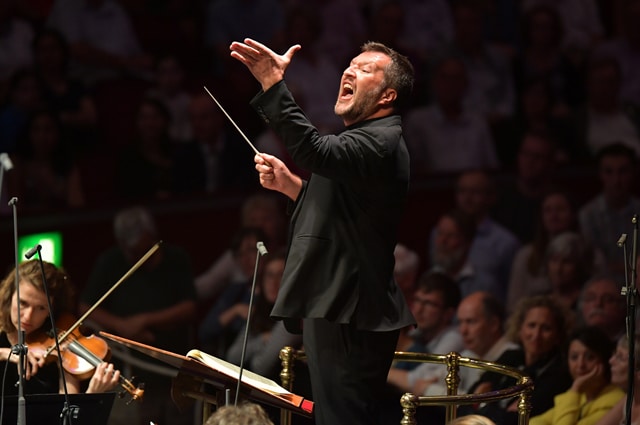 Two pieces written in recent years were framed by two symphonies in this Prom from the Britten Sinfonia, conducted by Thomas Adès. Together they created an interesting programme, with the numerous contrasts to be found across the evening extending to the fact that the soloists featured a Proms debut artist alongside a festival stalwart.

The first ‘new’ piece was Francisco Coll’s Four Iberian Miniatures of 2014, which was enjoying its London premiere. Each of the miniatures lasts two or three minutes and represents some form of take on ‘popular’ Spanish music. In each instance, however, Coll does not so much imitate the style of, for example, the tango or fandango as interpret various elements that make the dances up, by viewing the forms through his own unique lens.

Violinist Augustin Hadelich, making his first appearance at the Proms, proved an excellent fit for the piece as he tackled the frantic moments and pizzicato passages with notable agility and a lightness of touch. The second miniature was particularly impressive with the programme note describing its interpretation of the popular Spanish dance as ‘an X-ray, a magnetised resonance of an Expressionistic tango’. That may feel difficult to visualise, but in the event one really sensed that the music was providing a forensic analysis of the dance form, even as it explored it in an otherworldly manner. 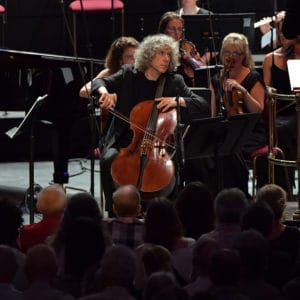 Thomas Adès originally wrote Lieux retrouvés, Op. 26 as a cello sonata in 2009. Earlier this year, however, he arranged it for chamber orchestra, and this performance marked the UK premiere of the new version. The fifteen minute piece does not possess a strict narrative but, in keeping with the title of ‘Places Revisited’, the movements explore ‘The Waters’, ‘The Mountain’, ‘The Fields’ and ‘The Town’, with the implication that the traveller returns to the latter at the end of his wanderings. With the piece conducted by the person who naturally understood it better than anyone else, and the soloist being Steven Isserlis for whom Adès had originally written the work, we felt we were experiencing the definitive performance of the piece. From the harp’s running quavers and the cello’s slow melody in the opening ‘Les eaux’ to the disturbing dance described as a ‘cancan macabre’ played back in the hustle and bustle of ‘La ville’, the performance felt brilliantly pitched in every way.

The Britten Sinfonia revealed committed playing throughout the evening, and the players really looked to be enjoying themselves. Adès’ conducting style also seemed well suited to the orchestra as his arms seemed not only to mark out the rhythm and mood, but to play out visually the sound he was searching for in every note. This in turn helped to secure notable levels of both energy and control.

In the case of Beethoven’s Symphony No. 8 in F major, Op. 93 (1812), which opened the evening, the precision achieved meant that the orchestra revealed the sharpness of wit that went behind many of the ‘jokes’ that the composer inserted. This said, the control exerted also meant that at times, and particularly in the closing Allegro vivace, the piece felt steadfastly earthbound when it really needed to take flight. No such problems dogged the rendering of Prokofiev’s ‘Classical’ Symphony No. 1 in D major, Op. 25 (1917), which closed the concert. With the performances of the Gavotta and Finale proving particularly effective, we saw sensitivity and precision walk hand in hand with the joyousness that is so important a feature of the final movement.