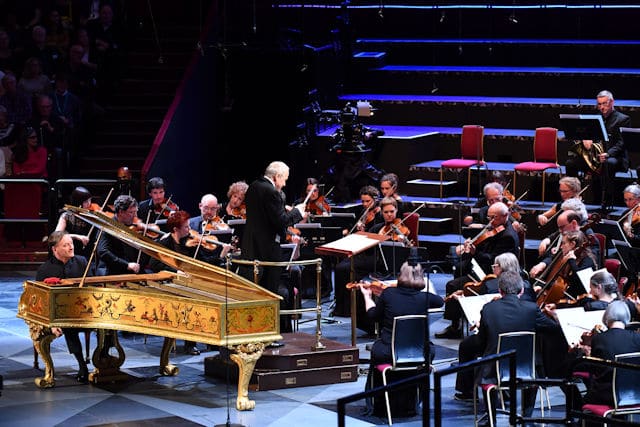 Queen Victoria’s piano played by Stephen Hough, with Adám Fischer and The Orchestra of the Age of Enlightenment (photo: Chris Christodoulou

With a clever nod to real Victorian values, the BBC programmed Sullivan’s Victoria and Merrie England Suite as the first item for this celebratory Prom. Bish-bash-boshed together from earlier works by Sullivan when he was playing the tables in Monte-Carlo, the full music (from which the suite is taken) was for a ‘ballet’ at the Alhambra Theatre. This was no royal-command performance, but a red-top mélange of hard patriotism and soft porn, featuring women almost-dressed as guardsmen. The Orchestra of the Age of Enlightenment under Adám Fischer responded shamelessly to the score, giving us a suitably stately ‘Druids’ March, a ‘Mistletoe Dance’ full of skittish violins and (following a patriotic brass rendering of ‘Rule, Britannia’), a ‘May Dance’ whose material (a skipping opening and a solemn warm brass melody) recalled the overture to Iolanthe.

Queen Victoria’s piano, loaned to the Proms by the current sovereign, is an 1856 Érard, and thus too young for Mendelssohn to have played at the soirées with V&A, but it was nevertheless deployed for the composer’s first piano concerto. The concerto hits the ground running with a pyrotechnic piano run after brief orchestral brooding; Stephen Hough put on an enviable turn of speed, but, sadly, the piano wasn’t really up to it. Under-powered, muddy and uneven-toned, it rather lost the contest against the OAE in the first movement, despite some virtuoso playing from Hough.

The slow movement, however, was a different story: Mendelssohn pares the orchestra back to low strings and woodwind, and here the piano came into its own, the rawer sounds of the OAE’s period instruments providing the perfect foil for its quirky timbre. Hough injected the opening cadenza with delicious sweetness, and the instrument’s harp-influenced muted quality blended beautifully with the warm string melody. A working relationship having been established, orchestra and piano delivered a splendidly busy third movement whose loud dynamic – full of scurrying violins and a cheeky oboe shadowing the piano – felt less of an unequal struggle.

The programme’s novelty items, five songs by Prince Albert (texts to Gruss aus der Ferne, Ständchen and Gruss an den Bruder supplied by his father, those to Aus Wilhelm Meister and Lebewohl by Goethe and Uhland), were charming but somewhat ordinary. Alessandro Fisher’s dramatic tenor voice was spot-on for the delivery of the Lieder, which he did with sensitivity and well-judged technique. He and Hough, though, cannot have found too much challenge in the works, which are essentially Schubert 1.0: pretty, legato melodies underpinned by simple piano harmonies accessorised by being played as arpeggios or chords repeated at octaves. The piano, of course, was perfect for these, and responded captivatingly to Hough’s expert touch. Lovely, Albert, but don’t give up the day job.

Mendelssohn’s symphonies are lacier than Beethoven’s, and, although well-thought-through and eminently tuneful, can feel a little too pat. The OAE and Fischer, though, did a splendid job with the third (‘Scottish’ – of course!). Again, it was the earthier sound made by the period instruments that provided interest and piquancy: the woodwind was squeakier, the raucous horns still carried the scent of the hunt, and the trumpets produced more complex harmonics.

The first movement’s attempts at good humour in a craggy landscape were precisely delineated, and the whirling strings, agile horns and skirling clarinet in the second summoned a Balmoral-style reel. The hymnodic violin tune of the third movement pierced the lowering atmosphere, and the pulse set by the pumping horns in the final Allegro vivacissimo was given a solid build all the way through to the horn calls and major-key melody of the finale.