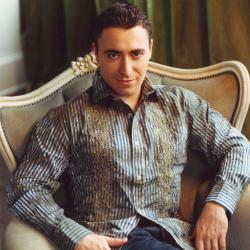 Maxim Vengerov is widely acclaimed as one of the greatest violinists of his generation. This is a fact which is backed up by the vast quantities of his fans who flock to his concerts worldwide.

Lesser known, is quite how involved in education this classical superstar is, or the extent of his abilities as a conductor. Prom 40 allowed him to showcase both of his extra-curricular skills as he conducted some of his young protégés, one of the most highly rated international youth orchestras, the UBS Verbier Festival Chamber Orchestra, along with fellow soloist, Lawrence Power, on viola.

As the group of musicians on stage were young, it was fitting that a young composer should provide the music. The Violin Concerto No.2 in D Major, K211 (1775) was written when Mozart was just 19, but despite his age he was able to write a complex, yet highly articulate work.

Vengerov tackled the high tessitura of the lyrical first movement with apparent ease. This effect was achieved through a light touch. The orchestra were technically good although they seemed a bit vacant when Vengerov wasn’t conducting them directly. However, as soon as he turned round to face them, they seemed energised and inspired.

Vengerov’s conducting style is very much like his playing. He is able to guide the listener through the music’s emotional interest and brings out the subtleties of the compositions, which you might only otherwise notice if you knew the pieces well. His attention to detail also showed itself in the way he prepared the orchestra, where it was clear that interesting nuances had been well rehearsed.

Vengerov caressed the soft curves of the richly resonant Andante movement. Another of his qualities which make Vengerov such a sensation is his ability to make any situation intimate, if necessary even the immense space of the Royal Albert Hall. Perhaps what helps him to achieve this is his complete lack of self-consciousness in the most vulnerable of circumstances, for example when he played the movement’s cadenza so stunningly quietly.

The Sinfonia concertante in E flat major for violin and viola, K364 (1779) opened with full, complex sounds coming from the orchestra. The two soloists performed the impressive and excitable dialogue of the first movement well. Both instruments produced full and sonorous tones. However, although they were well matched, Vengerov clearly retained his leadership. Nevertheless, Power was a lyrical and entertaining player. Particularly impressive were the perfectly coordinated cadenzas. It was a pleasure to see the intuitive unspoken communication between the performers.

The orchestra didn’t play the Andante second movement with the relaxation of the conductor. However, this was better than if the tempo had dragged. When the soloists entered, their music floated sublimely over the texture. The most impressive thing about the movement was the well executed crescendo build towards the cadenza.

The Presto was pacey, although elegant in its execution, without any sense of frenzy. The performers obviously enjoyed playing it, based on their smiling faces. Here, the viola particularly shone through, providing a robust grounding to the high other parts.

The fanfare like opening of the Violin Concerto No. 4 in D major, K218 (1775) was a seamless flow of rippling little questions and answers being batted between the players. By this time the audience seemed to have learnt not to clap between each movement. However, Vengerov wasn’t even prepared to put up with their coughing fits as he buoyantly launched into each successive movement.

The most invigorating movement was the finale (Rondeau: Andante grazioso Allegro non troppo). The bagpipe-like drone was complemented with bright textures from the other sections of the movement, although it was played with smooth yet humorous pomposity.

The final piece of the evening was the Symphony No. 29 in A major, K201 (1774). This was Vengerov’s chance to shine purely as a conductor. If he felt uncomfortable on stage without his violin, it didn’t show.

The symphony defies convention by opening with a slow accompaniment to the thematic material instead of the more regular pulsing rhythm. This has the effect of moving the melody onwards as opposed to what might be expected. The orchestra didn’t get carried away though, and maintained their control throughout.

Vengerov’s conducting was a pleasure to watch. He didn’t always conduct with his hands; sometimes just knowing looks were enough. It seemed that a lot of the time he trusted the orchestra to keep the beat themselves, however he was always there at difficult points to control the situation.