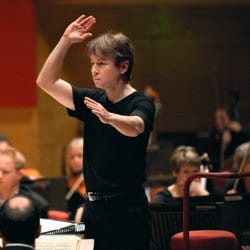 If there is one cardinal sin in orchestra playing that one should never break, it is ensuring that the string bowings (which consists of the binary up and down) are the same throughout each section.

While people are fallible and make mistakes, consistent bowing errors are more a sign of apathy and disregard for the music, which, I am sorry to say, was what happened in this concert.Under the baton of composer/conductor Esa-Pekka Salonen, the Philharmonia Orchestra started the evening with the UK premiere of Steven Stucky’s Second Concerto for Orchestra.

The Philharmonia’s ability to compact and tighten their playing even in large forces is highly impressive, and we were treated to an amazing display of sound colours and tonal landscapes for the start of the evening. However, after the initial bang, the orchestra proceeded to perform the rest of the work, and the rest of the evening, in the most uninterested fashion. And whilst the running scales throughout the first movement being passed from one instrument to another were smooth and seamless, one could feel that the orchestra could have indulged themselves just that little bit more and make the music more enjoyable, not just for the audience but for themselves too.

The second movement was also somewhat boring, but the fault probably lies with the composer more than the orchestra. The promise of newer harmonies never materialized, and the orchestrations used were very conservative, which was not helped by the Philharmonia’s indifferent playing. The last movement was more exciting, with fast notes and flying bows all over the place, but once more the performance was oddly unengaging, which once more shows that good technique is nothing if one does not make the effort to play music instead of notes.

After the interval, we were treated to Ravel’s Piano Concerto in G, with Proms debutant Franois-Frédéric Guy at the piano. The orchestra showed a bit more interest in performing this work, and the flutter tonguing portions were done with relish. The pianist’s touch and note attack was extraordinary, and coupled with his technical precision, made for an excellent first movement. I do wish he had taken a bit more time with his playing though, especially in the second movement with what could probably be the world’s hardest solo. His playing was exquisite, albeit terribly regular, and it did not help that soloist and conductor could not quite agree on a tempo to play the middle section. The scarily precise trill that ended the second movement was probably the showpiece of the pianist’s virtuosity, and it truly is a testament to hard work and practice. The last movement was played with a lot more fun (finally!), but still very regular and metronomic. While the dynamic and intensity levels were well done, and the orchestra’s intonation was near perfect, the performance was really cold, and truly I wish that the players could have just taken that little bit more effort to engage with the music more.

Musorgsky’s Pictures at an Exhibition ended the evening, and after the most impressive trumpet opening ever, the strings proceeded to spoil the evening by making a complete mess of their bowings and notes one would have expected cleaner notes from a professional orchestra. The lower string accompaniment in Byldo felt more like a snail than an ox-cart such was the lack of weight they put into the performance. The winds made things decidedly worse by going out of tune during their chorales (especially in The Great Gate at Kiev), and apart from the gong player, the entire percussion section needed a bit more inspiration.

Admittedly the tightness and compactness of the orchestra was a joy to behold, especially in the Ballet of the Unhatched Chicks, and Baba-Yaga was performed with a passion that I wish had been prevalent throughout the rest of the evening. The Hero’s Gate at Kiev was weird on one hand the highly impressive brass section and gong player, and on the other the rest of the orchestra which was highly unmotivated.

In all, an evening of the most inert but technically proficient performances.