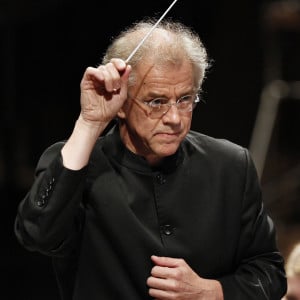 The BBC’s Sibelius symphony cycle was brought to a suitably Finnish finish on Monday night by the BBC Symphony Orchestra under the direction of Osmo Vänskä – a conductor who is in the middle of recording his second Sibelius symphony cycle with The Minnesota Orchestra. Vänskä’s is a sure hand at the helm of the music of his countryman, and this account of the Seventh Symphony was tremendous. It is a strange work that continues to build a whole out of fragments in an oddly convoluted sonata form, and it needs an orchestra and conductor who understand the end-point to make sense of the journey. Vänskä and the BBC Symphony Orchestra got this perfectly, and the measured performance – in terms of both dynamic and tempo – presented the audience with some magical way-markers: some perfectly hushed moments in the strings, well-co-ordinated horn ensembles, and finally a luminescent arrival at the main theme on the trombones. This was the near-perfect performance that the cycle had been awaiting.

The evening started less well, however, with a slightly bitty performance of the ever-popular Fifth Symphony that felt a little as though it had been left to look after itself. The uneven edges weren’t so much in either pitch or togetherness, but rather in blend – particularly in the wind sections of the orchestra; there seemed to be a frog in the throat of one of the trumpets, and the horn chorus sounded grainy, rather than warm. The strings, however, kept things together, and provided some excellent contrasts in light and shade – the ‘slapped’ double basses in one of the energetic variations of the second movement were particularly enjoyable. It is impossible not to savour the full orchestral climax of the ‘Swan Theme’ at the end of the symphony, and Vänskä’s tempo allowed it to shine in its full grandeur.

The sixth symphony, Sibelius’ ‘landscape of the mind’ was given a suitably autumnal rendering, and the tone of the orchestra had improved hugely during the interval – the woodwind ensemble felt more blended, and there were some very special moments from the ‘cello section in the fourth movement. Again, Vänskä’s control of tempo and dynamic provided suitable contrasts, from the edgy scherzo in the third movement, to the gradual waning of the sound towards the closing moments of the final sunset.

A Proms performance of all seven of Sibelius’ symphonies was always going to be compared to Rattle’s ‘Barbican cycle’ earlier in the year, and, as would be expected, it was a more varied set of performances, but that is, perhaps, no bad thing, and is much more in the spirit of the multi-faceted festival that the BBC presents every year.