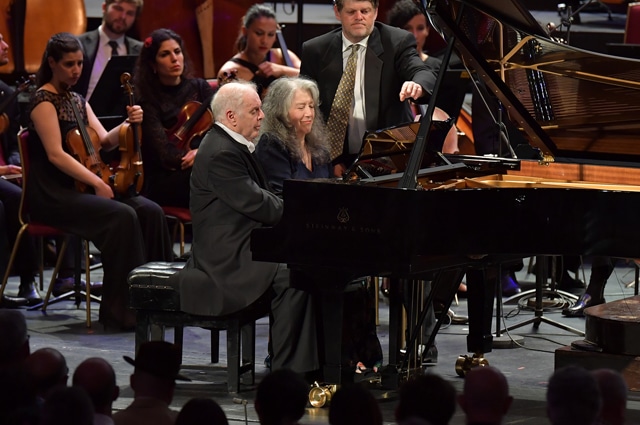 The West-Eastern Divan Orchestra is Daniel Barenboim’s magnificent project for uniting the fractured Middle East through music. It consists of Arab and Israeli members, as well as a core of Spaniards, and Seville – that historical cultural melting pot of Islam, Christianity and Judaism – is their base. A concert, therefore, made even more challenging by the inclusion of works by the anti-Semitic Richard Wagner, ensured that security was at a maximum, and, alas, no players’ names were released – a great pity, as the timpanist at Wednesday evening’s brilliant concert was almost as much of a star as Barenboim himself, (or the guest pianist, Martha Argerich), and deserves his name in print for his impressive playing, from the grandiose rolls in the Liszt concerto, to the tiniest, sinisterly echoing strokes in Siegfried’s Funeral March.

A resounding set of timpani-underscored chords opened Con brio by Jörg Widmann. They heralded a tiresome eleven-minute fusion of soundbites of Beethoven’s 7th and 8th symphonies (sounding as though they’d been processed by the aural equivalent of Deep Dream, to produce something that was all sinister eyes and teeth) and daft noises from the orchestra – the same kind of unsounded blown brass instruments, timpani rim-shots, scrapes, clicks and quacks that characterised Iris ter Schiphorst’s Gravitational Waves in Prom 29, but with far less humour and self-awareness. Like a course from a Michelin-starred tasting-menu, it was cleverly constructed and decorative, but ultimately unsatisfying. 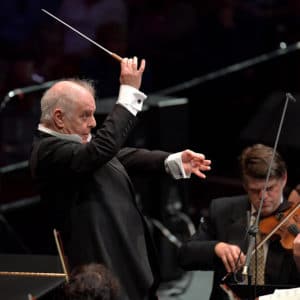 Martha Argerich is one of the pianistic giants. She is notorious for cancelling concerts, but it means that she is a rare treat when she appears. Her performance, along with that of Barenboim (her childhood friend) in Liszt’s first Piano Concerto was breathtaking. The pair of them were clearly sharing a rapport that is seldom seen, and it delivered a magnificently controlled, yet seemingly personal account – no shortage of rubato where needed, but always in complete synergy, to which the orchestra responded in kind. The exquisitely limpid trill at the end of the second movement – that leads to the triangle-launched ‘tip-toe’ music of the third movement – was heartbreaking. The partnership continued with a beautifully co-ordinated encore performance of Schubert’s late A-major Rondo by the two of them at the piano.

The problem with Wagner’s orchestral works, is that, outside the overtures (which are designed as stand alone pieces), everything really does tend to become a ‘bleeding chunk’. The two overtures of the second half (Tannhäuser and Meistersinger) were given good solid concert-hall performances, the orchestra once again demonstrating their ability to move from the mellowest string tones and quietest wind chorus (as at the opening of Tannhäuser) via the playful not-quite-giving-it-away iterations of the prize song in Meistersinger to the grand (albeit not raucous enough to suggest anything but saintliness) trombone chorus of the Pilgrims’ hymn.

The extracts from Götterdämmerung were made less satisfying by the lack of opera around them. Dawn/Siegfried’s Rhine Journey absolutely needs that passionate duet, and the subsequent orchestral complexity that comes when Siegfried meets the Gibichungs. The orchestra remained brilliantly controlled (and here, at last, were the raucous trombones giving us Siegfried’s ‘Hero’ leitmotiv – surely the tune David Cameron was trying, inexpertly, to hum on his departure), and it was a joy to hear the music performed outside of the pit, but both the Rhine journey and the Funeral March have endings that provide no proper dénouement without the following drama. The encore – the introduction of Act III of Meistersinger – was lovely, and again, beautifully rendered, but managed to end the evening less triumphantly than it deserved.