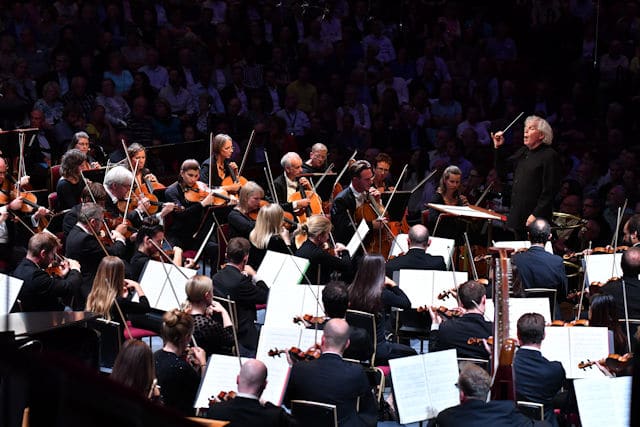 Sir Simon Rattle always enjoys challenging and educating his audiences: they must do their homework before being allowed their tea. Tuesday’s Prom was no exception, and before the feast, he and the LSO set the prep.

First, Eng. Lit. and Les bandar-log, Charles Koechlin’s musical portrait of Mowgli and the monkeys from The Jungle Book. Koechlin has been unjustly neglected at the Proms, and it was good to hear the work given such a polished outing. In the quietest of openings, the steamy jungle was conjured through lush, complex chords underscored by a gong, the somnolence soon disrupted by the whirling of woodwind, strings and tuned percussion as the monkeys arrived. Rattle kept the orchestra on a tight rein throughout, using texture and dynamic to emphasise Koechlin’s ulterior motives: a pop at what he saw as the faddishness of his musical contemporaries. The angularity of the serialist parody was emphasized by allowing the bizarre instrumental combinations to sing, and the neoclassical fugue – begun in the double basses, but developed on twinkling harps and piano – was given a comic pomposity. The brass had its grandly raucous moment at the end, and the jungle returned to its mysterious torpor with the quietest of high-position violin figures.

Geography next, with Edgard Varèse. Varèse’s short catalogue divides roughly into his early French-steeped impressionism and ‘sound-masses in collision’ influenced by his move to New York. Neither are easy listening, and Amériques, sitting on the juncture of the two, is difficult to love. Rattle and the LSO opted for the version of the piece before Varèse made cuts in length and orchestration, and thus the audience was treated to offstage bands, comedic duck and crow calls, a steamboat hooter, and a factory siren: whistles, if not bells.

It was an exemplary performance, again, with timbre and dynamic to the fore, with the orchestra negotiating Varèse’s fiendishly entangled counterpoint and giddy changes of instrumentation adroitly. And in this mercuriality, one encountered the challenge of Varèse. It’s as though he is manically rushing around, trying ideas, testing textures, and getting bored with them. The impressionistic ‘structure’ is too nebulous to hold the sonic images summoned out of the fog – a clanking foundry, the calls of birds, or the hoot of a passing boat – and, despite an account full of drama, humour and sheer volume from the LSO, there was no sense of musical direction, Varèse trying here a sad-trombone-with-harp combo or a plucked-cymbal, or a brief impressionistic flute melody over twangling percussion. Like a Christmas-Day dip in the sea, it was bracing, and you were glad you’d done it, but all you really wanted was your dinner.

And dinner, in the form of Walton’s Belshazzar’s Feast, was lavish. The LSO were joined by The London Symphony Chorus, Orfeó Català and their Youth Choir to create a 300-strong chorus that would have sent Belshazzar’s staff out to borrow the neighbours’ crockery. Rattle’s understanding of Walton’s requirements was, as ever, consummate, and the orchestral and choral colours were opulently displayed from the pianissimissimo of ‘By the waters’ to the final blare of ‘Then sing aloud’, the latter taken at an astonishingly breakneck pace. The chorus was impressively together – both on entry and tonal shading – for such a vast bloc of singers, and Walton’s trademark sudden shifts in dynamic were nicely delineated, although some of the sforzando/pianissimo/crescendos could have been more contrasted, particularly towards the end, when excitement was mounting.

Gerald Finley’s baritone, carrying both an insistent presence from its upper harmonics, and commanding weight, made for a major domo par excellence.