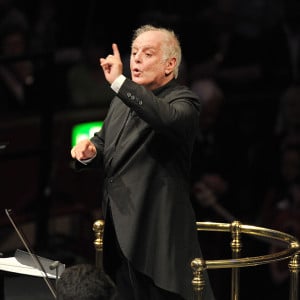 It’s not often that a BBC Proms concert overruns its scheduled finish time by 35 minutes, but it’s a measure of the positive atmosphere created by Daniel Barenboim and the West-Eastern Divan Orchestra that I don’t think anyone was complaining, apart from maybe the presenters of the radio stations across Europe relaying the BBC’s live broadcast.

Despite the feel good factor engendered during the evening, the performances along the way were not always entirely satisfying. The opening piece, Schoenberg’s Chamber Symphony No 1, was directed by Barenboim with a strong feeling for the music’s romantic sensibility as well its colour and atmosphere. The instrumental playing was expressive and virtuosic, and despite the work’s pioneering density of thematic argument, the legacy of Brahms and Richard Strauss was never far away. However, the Royal Albert Hall is not the best place to hear an orchestra of 15 players, and much of the playing was too quiet to make a real impact, the double bass in particular often inaudible from my seat in the stalls.

Beethoven’s Triple Concerto fared somewhat better, helped by the positioning of the violinist Guy Braunstein and cellist Kian Soltani at the front of the stage, allowing their sound to project more fully into the hall than that of the seated players in the Schoenberg piece. Barenboim had the dual role of pianist and conductor, although mopping his brow seemed to take up at least as much time as giving direction to the orchestra. Nevertheless, the accompaniment was warm and incisive, the volume held in check to emphasise the interplay between the three main soloists. Soltani’s elegant phrasing in particular was a pleasure to hear, matching well with Braunstein’s incisive interpretation. The result was a warm and collegiate performance that only towards the end of the finale lost something in concentration and momentum.

Given the orchestra’s restrained role in the concerto, I rather expected to hear it allowed off the leash in Tchaikovsky’s Fourth Symphony. However, Barenboim had different ideas. The first movement was controlled and refined, the opening brass fanfare sounding cultivated rather than declamatory, the strings expressing warmth rather than febrile passion. Such an approach is not an invalid one, but here pianissimo passages were hushed to the point of inaudibility, as was some of the pizzicato playing in the Scherzo. There was no denying the eloquence of the woodwind contributions in the Andantino or the refinement of the playing in the symphony overall, but even in the symphony’s finale there were moments where Barenboim stilled the flow of the music as if to highlight the beauty of passages normally overlooked by conductors racing their orchestras to the finishing line.

Still, this wasn’t the end of the concert. Barenboim and the orchestra conjured up no less than three encores: Sibelius’ Valse triste, Glinka’s Ruslan and Lyudmila Overture, and El firulete, a Tango arrangement from Argentina, the land of Barenboim’s birth. It was a late finish but ultimately an uplifting one.