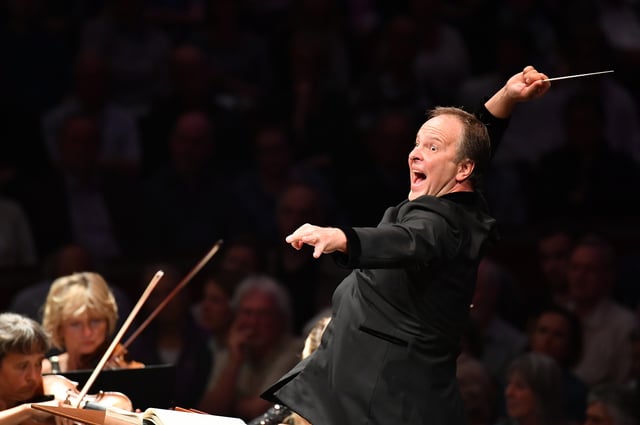 It is impossible to attend a performance of Mahler’s Symphony No. 2 in C minor at the Proms without memories of past performances coming flooding back. While the Albert Hall is not acclaimed for possessing the greatest acoustic in the world, it does present a good space in which to present the piece, given its vast size and inviting areas (such as the gallery) for the off-stage forces. It is therefore a canvas that each conductor chooses to use in a different way to create ‘their’ masterpiece.

The most recent Proms performance in 2014 saw Daniel Harding seemingly experiment with just how far he could push the piece, with some tempi being incredibly slow and other passages being driven at breakneck speed. It was a performance that disappointed some, but left others feeling that it had shown an astute understanding of the piece and of Mahler’s intentions. One might argue that this performance from the BBC Symphony Orchestra, under the baton of Sakari Oramo, also displayed a similar level of knowledge, while limiting the outer parameters to which it ever ‘strayed’ to a far greater degree. In this exceptionally textured and multi-faceted performance, a strong balance was achieved between capturing the piece’s delicate and visceral qualities. If the performance’s relatively weaker moments came at those points when it did not get the balance entirely right, these were fairly few and almost entirely absent from the final three movements.

For a symphony dubbed the ‘Resurrection’ this performance seemed to complete the cycle of life and death as the sound frequently felt as if it was rising from the depths of the earth. In this way, in the first movement the strings generated the right sense of mystery and spirituality both in the shuddering tremolo that opens the piece and in each introduction of the lyrical melody. Overall, the movement suffered a little from the various musical ideas being emphasised, and hence dwelt on, slightly too much to capture the overall sweep of the music, but it still provided a strong opening to the performance.

The Ländler of the second movement was rendered with a wonderful delicacy, which, as a result, fell just short of capturing its truly ‘rustic’ qualities. After this, however, the performance went from strength to strength. The orchestra brought sufficient gravitas to In ruhig fliessender Bewegung while Elizabeth Kulman’s performance of ‘Urlicht’ was exquisite, with the strength of her mezzo-soprano coming through even as she delivered the section with a degree of understatement.

No less impressive were soprano Elizabeth Watts and The Bach Choir and BBC Symphony Chorus in the final movement. This was rendered with a great deal of panache, with the sheer volume brought to the proceedings being one of several reasons why this performance felt more overwhelming than most. Nevertheless, the moments involving just a few brass lines were just as moving as those that saw the instruments at their most exuberant.

At the beginning of the evening Sakari Oramo dedicated the performance to Jiří Bělohlávek, who sadly died in May following a long association with the BBCSO where he served as chief conductor and then conductor laureate. When we heard the words ‘Unsterblich Leben / Wird der dich rief dir geben!’ (Eternal life shall he who called thee grant thee) it felt like a highly fitting tribute, emphasising how there are no endings and that Bělohlávek lives on through his work.