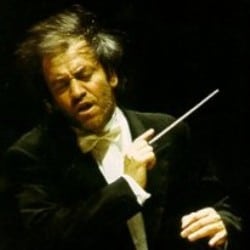 Though it was through illness rather than design, we were treated to something like ‘musical chairs’ during the Mariinsky’s weekend at the Proms. On Saturday (Prom 48) Sergey Alexashkin was due to sing the bass solo in the Babiy Yar symphony. However his place was taken by Mikhail Petrenko, apparently to allow Alexashkin to replace another bass soloist who was due to sing Boris in Lady Macbeth of the Mtsensk District the next day. Notwithstanding this chain of replacements, a high standard was maintained throughout.

Lady Macbeth of the Mtsensk District was Shostakovich’s first take on Leskov’s short story, which deals with an oppressed woman who sinks to several murders including her own. Shostakovich sympathises with frustrated Katerina – hence some beautiful music written for her character – but neither this opera nor Shostakovich’s return to the topic 30 years on (Katerina Izmaylova see our review of the Mariinsky’s performance on 23 July) is easy entertainment. With the risk of irritating countless musicologists and historians, I would hazard the suggestion that no wonder Stalin did not like Lady Macbeth of the Mtsensk District.

Gergiev and the Mariinsky gave a wonderful concert performance of this opera. Commitment, innate understanding of both text and music was evident. Nevertheless, there were some aspects which concerned me. The main protagonists – Katerina (Larisa Gogolevskaya), Boris (Sergey Alexashkin) and Sergey (Viktor Lutsiuk) sang from music, which was placed in front of them on rather low music stands. More often than I would have liked, they sang downwards. All the other characters (some twenty in all) sang from memory, straight to the audience. The chorus also used music but they held their copies in time-honoured sensible tradition, producing choir singing at its best. Sound production with/without a music stand and with/without music resulted in a very slightly uneven tonal quality.

The stage set-up also caused occasional problems. All solo singers stood a little in front of the conductor, mostly with their backs to him. In the third act, The Shabby Peasant was slightly out of time with Gergiev, whom he could not see at all. For the same reason, Katerina came in a touch early on the very last word of the first act. While Sergey (Lutsiuk) acted his character (vocally as well as physically) from the very beginning within the confinement of a concert performance, Katerina (Gogolevskaya) and Boris (Alexashkin) took quite a while to get into their characters.

Gogolevskaya sang beautifully but not during the early stages of the opera. Her very first note, which happens to be the first vocal note in the opera, was approached from below. So were several other notes for quite a while until evidently this great singer warmed up. Sergey Alexashkin is a noble singer, with an ability to produce various shades even on one note. During his death scene he sang beautifully. But he sang beautifully even when the text suggested other qualities than beauty. Sometimes his voice sounded underpowered (perhaps due to singing to the music stand), particularly in the low bottom notes. But musically (including rhythmically), this artist cannot be faulted.

All other characters (nineteen in all) delivered commendable performances (from memory) and with a more or less good degree of acting. Special mention must be made of two wonderful bass singers: Mikhail Petrenko (Priest) and Gennady Bezzubenkov (Old Convict). Both of them clearly know the material well: Bezzubenkov sang Boris and Petrenko sang the Priest in Mariinsky’s performance of Katerina Izmaylova on 23 July. It should be mentioned here that the main differences between Shostakovich’s two versions concern words in the libretto and orchestral music.

The Mariinsky orchestra is a marvel, a shining example both for solo playing and for ensemble. And, of course, for stamina. On this occasion I would like to mention the virtuoso xylophone passages (for instance in the Interlude of the first act and also in the fourth act), the lovely solo cello section in the first act, exquisite violin solos in the second act, the sensitive prolonged timpani solo in the fourth act and the amazing sound and ensemble of 20 brass instruments plus four horns in the Interlude in the second act. The team work in the Mariinsky is exemplary.

Gergiev controlled, directed, inspired and delivered a great performance. Though surely unintentionally, he even acted a bit: in the ecstatic love scene at the end of the first act Gergiev jumped at the climax. Let it not be said that Gergiev does not identify with the matter in hand.