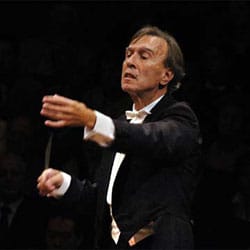 When the Lucerne Festival Orchestra was established by Claudio Abbado and Michael Haefliger in 2003 it was intended, in essence, as a vast chamber ensemble.

With the Mahler Chamber Orchestra at its core, plus numerous solo, orchestral, and chamber musicians who have worked closely with Abbado, the orchestra places a premium on listening to each other in an effort to present intimately refined performances of the great symphonic repertoire.

With this in mind, it was curious that their Proms performance of Mahler’s Third Symphony in D minor at times lacked the very sense of togetherness that the orchestra sets out to achieve. This notion of inconsistency was aptly summed up in the third movement. On the whole, it was an extremely nuanced performance, with magnificent flute solos, elegant inflections from the violins, and a shocking, powerful finale. Yet a possible failure to acknowledge the auditorium’s notoriously unforgiving acoustic led to issues of balance – Kai Frömbgen‘s attractive oboe solos were almost wholly enveloped by the surrounding sound – whilst the relationship between orchestra and posthorn left much to be desired.

There was plenty to admire in the first movement, not least the mesmerising solos from trombonist Jörgen van Rijn and first trumpet Reinhold Friedrich (both of whom received justifiably rousing individual ovations upon the symphony’s conclusion). Stark declarations from the woodwind and near-faultless ensemble from the brass added to the extreme profundity of the work, as did the stunningly executed central military march. Unfortunately, the upper strings could not match the weighty cohesiveness of their bass colleagues, and were unable to actively attract the listener’s ear. This caused problems in the second movement, in which many palpable opportunities for charm and expression – especially by the violins – were passed over or underplayed. Still, Abbado engineered a delightful ending, as the orchestral sound was gently whisked away.

Mezzo-soprano Anna Larsson delivered an enthralling performance in the fourth movement, generating a focused and extremely absorbing depth of tone. This was highly appropriate, as “deep” is a constantly recurring theme in Nietzsche’s text. Here, the oboe and cor anglais shone with tantalising responses to Larsson’s measured longings. The ensuing movement came via an awakening attacca, and was characterised by the superb collective timbre of the Trinity Boys’ Choir and the women of the London Symphony Chorus.

The beginning of the sixth and final statement of Mahler’s monumental symphony was intensely moving, as the orchestra’s strings meshed into tender oneness capped by a resonant ‘cello melody. The second theme, full of anguished yearning, was equally spellbinding. Yet, the transition from one to the other – a startling shift from D major to F-sharp minor – was subject to a momentary loss of intent, sounding somewhat untidy and matter-of-fact. Nevertheless, the movement unfolded well, marked by Jacques Zoon‘s sincere flute solo and an exquisite chorale from the brass, as it led towards its climax; which, in the end, was rather anti-climactic. In place of awe-inspiring grandeur and opulence, Abbado’s reading evoked nostalgia and nobility, the orchestra nowhere near its full dynamic capabilities. Though this unexpectedly reserved approach was both thoughtful and thought-provoking, its effect was, ultimately, underwhelming.

A premature and highly unwelcome “Bravo!” at the end obliterated any chance of a poignant silence, something Abbado’s interpretation was most likely trying to achieve. From the moment Abbado walked on to the stage, one had the distinct impression that many patrons had come primarily to see him, rather than listen to what he had to say. Though this was certainly an agreeable performance, the rapturous applause at the work’s end would have led one to believe that it was something significantly greater.