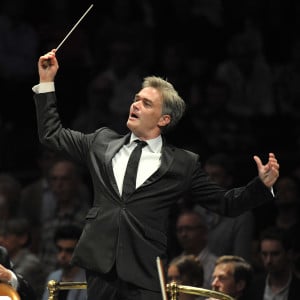 Two pieces in this programme from the BBC Symphony Orchestra, under the baton of Edward Gardner, could have been described as symphonies with a difference. One of these was Raymond Yiu’s Symphony, which was enjoying its world premiere and, with less than three weeks to go, must surely be a contender for the most successful BBC Commission of the 2015 Proms season.

The symphony’s unique selling point is that four of its five movements feature a countertenor, and his presence proves to be the backbone of a striking exploration into humanity, memory and personal experience. Its first movement sees the soloist conjure the symphony into life as fragments of sound come from different sections of the orchestra and the countertenor embraces verses from Walt Whitman’s poem ‘Song of Myself’.

The second wordless movement similarly features a ‘restrained cacophony’ of sounds from across the orchestra before a section, heralded by solo oboe, emerges that is based on Scarlatti’s Sonata Kk87 in B minor. This piece has great significance for the composer and one of the symphony’s subtexts may be that only when our feelings for something are so strong do we hear them above the noise of the crowd.

It is hard to picture a symphony of this nature ever working for any voice other than a countertenor, and soloist Andrew Watts revealed just what it can bring to the proceedings. In the first movement it ‘stuttered’ and reflected on words such as ‘strong’ (which acts a counterpoint to ‘song’) while conversely the word ‘skin’ during the third movement’s presentation of Constantine P. Cavafy’s poem ‘Come Back’ was rendered with brilliant purity of tone. The novel fourth movement also brought a further dimension to both the symphony and Watts’ voice. It utilises the Thom Gunn poem ‘In Time of Plague’ but transforms it into a 1970s disco song whose upbeat rhythms deliberately sit uncomfortably with the subject matter of AIDS and death. This proved incredible to witness because it saw a disco tune rendered with the type of complexity that only a symphony orchestra could bring to it. Watts’ sound suddenly became fuller and harder edged, which made it particularly poignant when in the final section of the movement it adopted its more standard, purer tone as a way of highlighting the pathos in the words.

The other symphony with a difference was Britten’s Sinfonia da Requiem (1939-40), standing as it does somewhere between a symphony and a requiem, and which the BBC SO rendered with immense skill. That piece opened the concert, while the evening ended in no less spectacular fashion with a highly textured and multi-layered performance of Janáček’s Sinfonietta (1926).

The programme’s other Proms (though not world) premiere, however, was Nielsen’s Flute Concerto of 1926 (his Clarinet Concerto appeared earlier in the season). It is a piece in which Nielsen often permits the flute to possess a Mozartian delicacy on the grounds that ‘the composer has to indulge the gentle creature, if he does not want to be stigmatised as a barbarian’, and yet sometimes destabilises the instrument, chiefly through the introduction of secondary soloists. Flautist Emily Beynon rose superbly to the challenges set by the composer, imbuing some passages with lightness and grace while bringing more gravitas to her sound in other places by adopting a thicker, though no less engaging, tone.