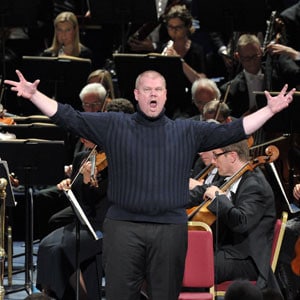 The row of chairs and absence of seafaring tackle promised stand and deliver, but something quite different transpired – a ‘semi-staging’ more powerful than the 2009 ENO original, concentrating in searing detail on the performances of an outstanding ensemble. Grimes, as Peter Pears wrote, “…is not a hero, nor is he an operatic villain… (he is) very much of an ordinary weak man who… offends against the conventional code.” There is nothing either ordinary or weak about Stuart Skelton’s protagonist, yet he still convinces us that this is Everyman, condemned to a titanic struggle against both himself and society.

There is no finer Grimes around today; heroic in his grand moments, heart-breakingly tender in the quieter passages, he brings Vickers to mind yet is entirely his own man – it seemed appropriate that after his magisterial singing of ‘What harbour shelters peace’ he departed through the arena, the packed-as-sardines promenaders parting for him like the Red Sea for Moses.

He was supported by an exceptional cast, mostly reprising their ENO roles, Iain Paterson’s Balstrode being the one major change; this is a young singer with a special affinity for Britten’s bass-baritone parts, and his portrayal here built upon his Glyndebourne Redburn (Billy Budd) in its warmly humane characterization and mellow legato singing. Leigh Melrose’s brilliantly spivvy Keene would be hard to equal, and Stuart Kale’s Reverend and Darren Jeffery’s Hobson were both treasurable assumptions.

Amanda Roocroft’s sensitivity and warmth make her the ideal Ellen Orford, and even though there was some strain in her ‘Embroidery’ aria this was a touching and convincing account. Dame Felicity Palmer ‘is’ Mrs Sedley, every nuance of the character’s neurosis conveyed both by phrasing and gesture. Rebecca de Pont Davies repeated her disturbing Auntie, as ever with tremendous panache, and her nieces were given more than usually sympathetic portrayals by Gillian Ramm and Mairéad Buicke. Michael Colvin’s Boles was another definitive characterization, as was Mark Richardson’s Swallow, despite being a last-minute substitution. Jacob Mason-White’s desperately vulnerable apprentice was strikingly performed.

Edward Gardner has this music coursing through his veins, and no more thrilling playing could be imagined than that which he obtained from the ENO orchestra, whipping up storm after storm both natural and metaphysical. The ENO Chorus was tremendous, whether in vindictive mood in ‘Who holds himself apart’ or wryly accepting at ‘In ceaseless motion,’ with Aidan Oliver’s superbly disciplined training enabling them to go from mob rule to shame as naturally as the rhythms of the sea which Britten’s choral writing so finely echoes. Apart from the walking of the plank which I hope was required of those who simply had to clap at the wrong moment, there was nothing to mar this great Proms evening.