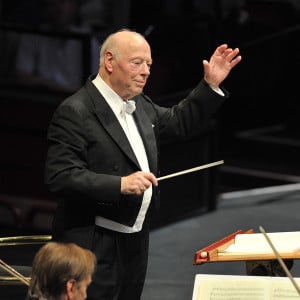 This concert by the Chamber Orchestra of Europe under the baton of Bernard Haitink was replete with style and good taste which pleased, yet for all that it proved rather uninvolving in an emotional sense.

Schubert’s Overture in C major ‘In the Italian Style’, dating from 1817, wore the vestiges of its Rossinian inspiration lightly. Initially a touch ponderous, Haitink secured playing full of contrast and characterful contributions from the brass and woodwind sections. From my seat in the furthest reaches of the stalls only the percussion lacked something in terms of definition against the wider ensemble.

Mozart’s Piano Concerto No. 23 in A major, K488, featured the renowned Portuguese pianist Maria João Pires as soloist. The opening Allegro movement was ushered in with sensitively blended string tone produced with a lightness of touch. Maria João Pires proved an articulate soloist, who projected her part unobtrusively, after a career spent in the composer’s company. Occasionally the left hand momentarily dominated, but the playing of Mozart’s brief cadenza drew one into the intimacy of the experience.

No less a pianist that Clifford Curzon acknowledged that nothing displays a pianist’s quality like a Mozart slow movement, and so it proved in this performance. The Adagio, cast in the key of F sharp minor, was introduced by Maria João Pires with the utmost feeling. With the soloist often heard against the barest of accompaniments the poetry of João Pires’ artistry was readily apparent in, for example, the inflections of light and shade that she brought to the several series of repeated notes that pepper the music. In short, the movement managed to engage one emotionally with the music in a way that the rest of the concert almost but never quite achieved.

The closing movement, was carried along by its lively and bustling character from the start in a way that captured the ebb and flow. Haitink ensured that all was well paced whilst João Pires brought an entirely naturalistic touch and tone to bear out her words from the programme notes: “It’s the music that makes us play. It’s not us who plays the music… I feel much more that the music takes us, teaches us.” Despite the Promenaders’ determined efforts to secure an encore from João Pires, none was forthcoming.

The second half of the concert featured Schubert’s Symphony No. 9 in C major. The opening movement opened with an amiable Andante and the transition to Andante ma non troppo was naturally handled under Haitink’s ever efficient baton. The second movement possessed its share of grit and bite in the Chamber Orchestra of Europe’s playing, building the sense of internal drama always shifting and developing. The Scherzo third movement carried a warmth of tone and carefully blended balance that allowed the many accents of instrumental colour to be readily appreciable. The joyful exuberance that imbues the Finale was readily forthcoming, with the boldness of its thematic ideas was not shied away from by Haitink. It was securely dispatched by the Chamber Orchestra of Europe, but the closing pages found the brass occasionally over-dominant against the massed strings.