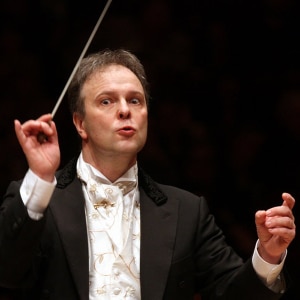 The enthusiastic applause from a surprisingly reduced audience at the Albert Hall last night brought to a close this year’s Proms celebrations of Jean Sibelius’ 150th anniversary, after a performance of two of the composer’s early works by the BBC Symphony Orchestra under their Finnish Chief Conductor Sakari Oramo. The evening began with the tone-poem En Saga, a dramatic work that, while inspired by the Finnish saga Kalvela, tells no specific story. The orchestra gave a good account of the piece, but it felt as though Oramo had to work hard to bring the Brits on board with its spirit. The atmospheric on-the-bridge strings, and the austere rendering of the melody on the double basses and horns made a promising start, but some of the subsequent speed changes felt a little laboured, and there were moments of disconnection between strings and woodwind.

In Sibelius’ 1892 cantata-symphony hybrid Kullervo, however, the audience truly felt that Finland had finally come to London. Under Oramo, the British orchestra responded with  conviction to the composer’s musical exposition of his country’s most famous saga. There was some magnificent handling of dynamics – from vast orchestral crescendos to the tiniest ghostly string passages. There were warm-yet-sinister horn sections in the second movement, portraying Kullervo’s youth, and the brass chorus was majestic in the martial fourth movement. The deliberately unsettling moments of skirling woodwind throughout the performance were particularly fine, and a special mention must be made of the clarinets, which, in these moments, deliberately produced notes with a lot of air in them, adding an extra dimension of unruliness to the texture; the orchestral ‘wail’ as Kullervo’s sister throws herself into the river was particularly chilling. Although there was a score on his stand, Oramo clearly conducted the piece from memory, and his innate understanding of it translated itself perfectly to the listener.

Both of the soloists for Kullervo were Finnish, and, like Oramo, performed the piece from memory. The soprano Johanna Rusanen-Kartano sang the part of Kullervo’s sister, and provided a suitably Wagnerian presence and tone, leaving listeners in no doubt of the piece’s place in the canon of late-romantic vocal works such as Schoenberg’s Gurrelieder or Mahler’s third symphony. The baritone Waltteri Torikka made his Proms debut as Kullervo, singing with astonishingly secure and developed tone for one so young. Until now, Torikka’s performances have mostly been in operatic roles, and he brought all of this with him to the stage – communicating to the audience, even in his moments of silence, Kullervo’s horror at his incestuous crime.

The star of the evening, however, was the male chorus provided by the tenors and basses of the BBC Symphony Chorus, and the Helsinki-based male-voice Polytech choir. The choral element of Kullervo is unusual, in that much of it is sung in unison; the effect of this is tremendous and is what adds to the work’s unique status – it is as if all the saga-tellers through the centuries speak with a united voice. The chorus last night managed this with spine-tingling brilliance. The pronunciation of the Finnish was absolutely uniform from the two nationalities, and the whole 130-strong chorus delivered the notes with an otherworldly synchronicity – a ghostly Nordic Greek chorus relating the inescapable tragedy – and with perfectly controlled dynamic range from quiet sibilance to monolithic declamation. The moment where harmony broke out – at Kullervo’s third, and ill-fatedly successful attempt at seduction – was magically ominous, and, arguably, the best moment of this year’s Sibelius performances.